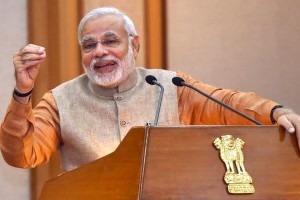 Namo’s first 100 days in the Prime Minister’s office have received bouquets as well as brickbats as his personality has always been polarising. He has taken some significant decisions the first being setting up of a Special Investigative Team (SIT), headed by former Supreme Court Judge MB Shah, to unearth illegal money stashed in tax havens such as the Swiss Bank. He has also injected fresh stimulus to India’s foreign policy especially in the immediate neighborhood.

His decision to invite SAARC nations for his swearing-in, including Pakistan Prime Minister Nawaz Sharif, was termed a ‘masterstroke’ and was even appreciated by the United States. Modi Government has also given a strong message to Pakistan by calling off the Foreign Secretary-level talks after Pakistani High Commissioner to India Abdul Basit met Kashmiri separatists despite clear no from Foreign Ministry. For the first time in India’s history, New Delhi under the leadership of Narendra Modi has asserted that it can’t be bullied by the pressure from the Kashmiri separatists and various lobbyists. He even seemed to have impressed the East Asian nations like Japan and China. Japan has agreed to invest over 33.58 billion in India over the next five years (Chai pe Charcha effect!!).

The Modi government stuck to Modi’s ideals of inclusive growth and announced several schemes for the poor, especially the Jan Dhan Yojana to integrate the poor into the banking system, garnering positive responses. Already the scheme has been a huge hit. On the inauguration day, a record 1.5 crore bank accounts were opened under this scheme. Modi has also abolished the EGoms(Empowered Group of Ministers) and Goms(Group of Ministers) which has helped in expediting the process of decision-making in the Ministries and ushering in a greater accountability in the system. Modi Government has also got the National Judicial Appointments Commission (NJAC) Bill passed in both the Houses of Parliament. The Bill scraps the Collegium System of appointment of Judges of Supreme Court and the High Courts and established a six-member body for the appointment of the Judges. The Chief Justice of the Supreme Court will head the NJAC. Besides, the judiciary would be represented by two senior Judges of the Supreme Court. Law Minister and two eminent personalities will be the other members of the Commission. Modi has also done away with the Babugiri. Infact there has been a major shift in the work-culture among the ministries.

Modi’s 100 days in office came on a high note, with the GDP seeing the fastest growth in two years, and the Sensex and Nifty reaching an unprecedented high. In the first quarter of this financial year, GDP grew at 5.7%, the highest in nine quarters. Increasing Communalism has remained a bane for the Modi government plus there have been talks of Modi being an autocratic leader.

Namo didn’t receive the best of birthday gifts on his 64th in the Assembly by-polls which again proved that BJP cannot rest on their laurels. Hundred days is too short a period to make any kind of judgement but he has made the right noises till now. If we go by his past records the future looks in the safe hands but Modi will need ‘Sabka Saath’ for any kind of ‘Vikaas’. Will he get it in this dirty power-hungry political world is the question?? birthday as the NDA was hammered

MBA – Rush for knowledge or Packages? – By Aishwarya Itagi

Fantastic Beasts and Where to find them – A Victorious Spell

Certainly jolted but not uprooted!!