Sarita Devi, what you did was not in spirit of the game !!!! 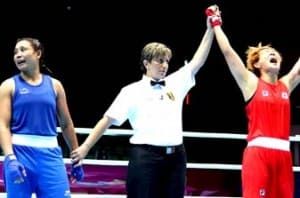 It’s been a couple of days since Sarita Devi was wronged by the judges which cost her the Asian Games finals bout. Sarita Devi showed her protest by returning the bronze medal in an outburst of emotion. But what is surprising is that the whole of India stood up for her and criticized the authorities for taking action against her misconduct.

What the people of the republic of India fail to understand is that it is not unusual that athletes have been wronged by bad decisions not even sparring the Olympics . Is it not the same country which applauds Sachin Tendulkar for walking out even when the umpire doesn’t rule him out. Aren’t we the same people who praise and exalt Rahul Dravid for his gentleman behavior on the field, be the decision wrong or right, he didn’t stay on the field and crib about the decision and neither did Sachin.
But what happens when an opponent has to face the ire of umpires wrong decision, does India stand up against it? The answer is a straight NO, it just becomes a minuscule part of a news that we don’t even bother as if it was no new thing. That’s it! Why don’t we create a scene then?

After Sarita’s incident India will be viewed as a crybaby on the international arena, cribbing on every decision which changes the odds for them. Be it for Steve Buckner incident or be it Sarita’s case, although in the  former, India had lodged a complaint to the higher authorities, but in the same way, if authorities charge Sarita for her breach of conduct, what is wrong anyway?  The people of India want a clean and an unbiased governance which treats people equally when they are guilty or not guilty, don’t they?

It is time, India should realize that when you are playing a sport, whatever the decisions taken on the field, they have to be accepted by the book of rules and that is the spirit of the game.

Refusing to accept the medal is an utter disregard and disrespect for the game, and criticizing the authorities for taking action against Sarita for her misconduct shows a double standard on the part of the people of India who have elected the new government to play everything by the book. We feel sad for your unfortunate loss Sarita Devi, but what you did was not in spirit of the game !!!