‘Guitaring’ Trends: I Express Because I can — As doublespoken by a Wannabe IT Business Manager

Access to the internet, along with social media, has gradually enabled us to engage in self-learning. The Guitar seems to be the very first instrument that everyone picks up. I do not wonder why, so I do not complain. Anyhow, with increased availability and decreased costs in media and communication, the so-called “passionate” guitarists have become ubiquitous. Most of us might have taken up the guitar just for the sake of building networks, or stringing together personal relationships (‘Dil ke taar’). What we fail to see is that the background content matters too. It is that which makes the song pleasing to the weathered and demanding ear. Nicholas Carr, whose articulated propositions (in his 2004 book, ‘Does IT Matter?’) debatably began the era of IT alignment with strategy, expressed few radical ideas because he firmly believed in them, or simply because he could. What he observed was that sustainable advantage lies not in ubiquity, but scarcity. It is always the rarest ability that takes the entire industry forward. Carr’s conviction has clearly transcended IT strategy and started making sense in the musical realm.

Up until early 2000s, Musical Innovation desperately needed a harsh wakeup call. The purpose could have been served, ungracefully, by one of my failed attempts, and additionally as a laxative thereafter. But as Carr would have said, the Guitar must not be viewed as a commodity input for short term wins and negative publicity. That trend is suffering from the seasonal Boom-to-bust now. As a consequence of this, like IT in the late 1990s, interest in musical theory and innovation for personal growth, is finally making the rounds, mainly owing to its pro-capitalist nature. After all, ‘YouTube’ is a free country for believers and pretenders alike.

But simply affecting the culture won’t cut it. The joy in composing, and then personally living and reliving the moment of achievement is something else altogether. It is no rocket science – playing the guitar. Anymore and I risk losing you as my reader by sounding presumptuous. Still, what I believe is that while experimenting with the fret board, one has infinite combinations, possibilities and sequences of notes that might sound great. All they need is a little patience, and a recording device. Back in the days of learning (or one could say yesterday), continued efforts and baby steps compelled me to never look back. In terms of skill, I may have merely scratched the surface, but at the same time, my glass-half-full way of thinking tells me something different: all I need now, is a matte finish and a larger sound-hole to make that same scratching sound a part of my composition! Did they ever tell us that we weren’t supposed to do it that way? Did they say there was a right way of playing the guitar? I guess they might have done so, but no one reads the Terms & Conditions nowadays. Guitar is the object of my attention, and I freely express in object-oriented languages. OOPS! But at least I try. 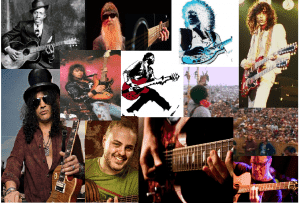 Let us reflect, and maybe experiment with some controversial doublespeak while we are at it. The history of guitaring may be viewed in black and white, although things did change for the better. Nuances harmonized at Nature’s request, and the disparities in race and status forced the general masses to rely on guitar legends like Robert Johnson, effortless fingerpickers like ‘Blind’ Arthur Blake, and Duck-walkers like Chuck Berry, to elevate their minds and drive the Blues culture into white-collar territories. Robert Johnson had to even go to the extent of making a deal with the devil to make that happen, finally joining the ‘27 club’ as repayment.

On the upside, that club must have become quite the band now, what with Jimi Hendrix, Kurt Cobain, and the fearless Leslie Harvey joining it a couple of decades later, immediately after some electrocuting performances in middle earth! It took three days of Woodstock and three hours of Jimi Hendrix to show aspiring electric guitarists how a show was stolen. And the rest is (also) history!

Then there were prodigies like Joe Satriani, Steve Vai, Slash, and Richie Sambora, along with veterans like Jimmy Page, B.B. King and Billy Gibbons, who conducted that electric-guitar culture through to the next millennium. The culture is worshipped even now, but a certain trend has recently brought back emotive trickles to the callous and head-banging rebels of this generation.

That same trend also gets us back to the present. Having ticked on all of the above, I still believe that neoliberal reforms in guitar, as well as awe-inspiring solos, began with the popularity of Percussive Acoustic Guitaring. It was Preston Reed, who gave birth to this art in the 1980s, but somehow wasn’t able to impress the audience then. In my opinion, post millennium, Andy Mckee and Antoine Dufour began to truly explore the percussive possibilities of the guitar’s hollow body. I was still struggling with barre chords while they were shamelessly trying every indecent move on the naked instrument. Clearly, it’s the dawn of a new era of modern guitarists – the ones who personify their beloved guitars, some even going as far as customizing and naming them (‘Bentar’, Google it!). 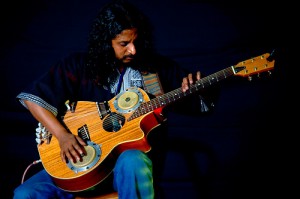 A section called ‘Beat it – A Guide to the Inspired Techniques of Percussive Acoustic Guitar Playing’ on guitarworld.com talks about the different ways in which we enthusiasts can start playing like these incendiaries of music. Also, the ‘How-to’ guitar tutorials on YouTube generate a sizeable amount of views every week. Like million others, I feed that fire too, just to be able to reach that league one day. Reed, Mckee and Dufour, along with their contemporaries like Don Ross, Jon Gomme, Jimmy Wahlsteen and others such, are the ones who have finally stopped trying to define music, and begun expressing it. Definitions rely on boundaries and scope anyway; music has neither.