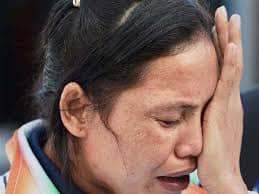 “They could have just told me that she will win at any cost. I would not have turned up for the fight.” This summed up the unfairness (of “bronze medal”) bestowed upon Sarita Devi.

Even if anyone has seldom knowledge about the rules of boxing and how points are scored, it wasn’t difficult to understand that the Indian boxer was well and truly hammering the daylights out of her Korean opponent and was the clear winner. Sarita simply pummelled her rival with her flurry of quicksilver blows. The Korean was in sixes and sevens for most of the matches.

But shockingly, Park was not given a single standing count by the Algerian referee Hammadi Yakoub Kheira despite looking shaken by Sarita’s blows to her chin. In the end, all three ringside judges ruled in favor of the Korean by identical 39-37 margins to the dismay of the crowd. The whole arena was flooded with jeers after the decision. Devi made her stand during the medal awarding ceremony refusing to receive the bronze medal and even giving it to the Korean.

The scenes turned uglier as Sarita’s husband Thoiba Singh threatened to go near the ring with the boxer in protest. It was also a shame on the part of the ‘toothless’ IOC who couldn’t even conjure up $100 when she wanted to lodge a protest.

There’s something seriously wrong in the world of boxing with each major event culminating into a controversy. It’s high time a more reliable and reasonable method is evolved to award points, and spot the winner in order to avoid a ‘Sarita-like’ incident in the future. This time around there were at least three bouts that were blatantly unfair with boxers from the host nation benefiting each time and it is more than a mere coincidence that the president of AIBA(International Boxing Association), the sport’s governing body, Dr C K Wu is from South Korea, suggesting a conspiracy.

As aptly put by Bobby Vijay Kumar of the Times of India, “Of course, it’s not because of her modest background that we must empathize with her; it’s for the cause she has embraced, putting everything on the line”.

I hope sanity prevails and she is not banned from playing the sport to which she has given it her all and our sleeping ‘Indian Boxing Federation’ wakes up and takes cognizance of the whole issue.

Once Kings (now Paupers) of the Caribbean!!