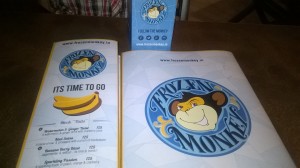 Ever since the birth of human race, food has been the principal need for its sustenance. Over course of years it has become more than just sustenance to ecstasy in pure sense. It is often said that the way to a man’s heart is through his stomach.  And hell yeah!! It is the most trusted and formulated theory which has been tested and proved. Being a big foodie myself, tickles my taste buds which motivates me to explore new food joints and have a go sometimes at the most outrageous eatables in the menu. One such opportunity came on my way when I visited E-Square at university road for a movie. “Frozen Monkey”, the name itself had a mischief in its tone which attracted me to take the leap of faith and have a go at its food which had providentially started just a week back.

It being an early outset of evening took my course to Frozen Monkey situated just below E-Square where earlier Out of the Blue restaurant and bar was present. As I was being accompanied by my special one, we often love to go through the whole menu and choose very unique starters and drinks to start with. In this case, we opted to stick with just drinks and starters to pour our heart out on them. The order included four types of unique blend of cocktails which made us to try eight different kinds of drinks which by far is at par with any bar or pub present in entire Pune. The food included Crispy Calamari, Chipotle Honey Baked Wings, Mexican Nachos and Chicken Crispers. As there was a pre-booked VIP party already in place inside the restaurant, we missed the crazy part of the monkey business i.e. the DJ of the house. But sitting outside on the corridor makes it more fun with all the crazy monkey pictures around the place. To add to the fun, an all-in-one desktop to take crazy selfie with monkeys was setup which was mostly occupied by the kids. The overall ambience of the place is pretty good and with a complacent music it makes the experience more special. The only issue observed was the delay in service which was not much of a problem taking into consideration the VIP party going inside which we later came to know was of Ajit Pawar who was by the way not present in the party. But once the munching of the food started with every sip of the drinks to complement it made me forget about the overburdened task of the waiters. The nachos and calamari being the show stopper for me was crispier than any I had ever tried.

To make things a bit comfortable the restaurant manager Vikrant was very polite and helpful in the overall process of servicing. A bright smile and happy face of a manager always make your experience more distinctive. I was carrying the movie tickets of the afternoon show, which had its own perk of getting 20% discount on the food by the restaurant. But when the bill came my surprise knew no bounds with only 2500 INR on the table. With eight drinks plus four hefty courses of starters and very less money flowing from my pocket made my day extra splendid. My rating to this restaurant would be 4.5 out of 5 taking out 0.5 to give it another opportunity to surprise me with better service and another marvelous food to munch on. A big thumps-up for the Frozen Monkey and a must go for all my monkey friends. 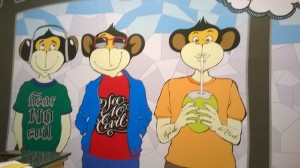 ‘Guitaring’ Trends: I Express Because I can — As doublespoken by a Wannabe IT Business Manager