Naaz: What is ‘Million Souls’?

Manjusha: It is an initiative started by IIT-Bombay with the aid of the government agency –National Renewal Agency. Their mission statement is ‘Right to Light’. They are doing this by preparing solar lamps for students from villages in order to help them study. They distribute these lamps to every student in rural areas enrolled between 5th standard to 12th standard. These lamps are exclusively available for them at Rs.120 which are actually priced at Rs.500. The aim of ‘Million Souls’ is to distribute one million lamps (‘soul’) to such students. Around 3,40,700 odd lamps have already been distributed. There are three focus areas of ‘Million Souls’ which are localisation (teach adults in rural areas how to prepare the lamps including the technology transfer and are also taught how to repair lamps and hence help earn their livelihood), saturation (ensure students from class 5th to 12th receive the lamps) and do-ablility (associate with other NGOs to expand this work). Similar work is also being carried on in Madhya Pradesh and Rajasthan besides Maharashtra.

Naaz: How has SCIT contributed to this initiative?

Manjusha: Saravan Sir and Shaji Sir encouraged us to help out Million Souls by conducting surveys regarding the distribution of the lamps in Jawahar, a village in Palghat district of Maharashtra. The need for conducting the survey was to find out whether the lamps which were already distributed in Jawahar have made an impact on the students. Whether the lamps helped them in their studies and whether they were facing any issues with the lamps (such as its maintenance). Another reason was to find out whether all the students had received the lamps or not. If not , then why were they not given the lamps? 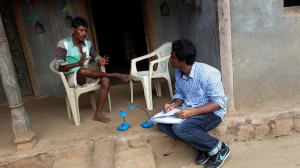 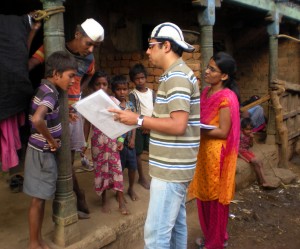 Naaz: How did you go about conducting this survey?

Manjusha: We visited every vasti (house) in the village with our questionnaire. Most of the vastis were dispersed and were very difficult to reach. We even had to do some trekking (as some of the vastis were located on a hill). We knocked at the door of every vasti and spoke to almost every person who owned the lamps. Luckily there were volunteers from the BAIF (NGO there) who helped us carry out the survey. We not only questioned them regarding the usage of the lamps but also tried to promote other solar products such as solar motor for farming, solar water heater, lantern and torches with additional subsidies. We had to use our marketing skills here A LOT! Besides, conducting the survey we also visited the local school there and checked out the classes. We had fun interacting with the children there. 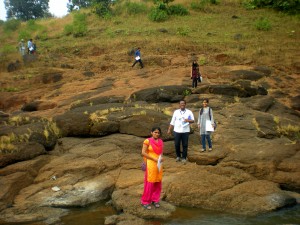 Million Souls – Trek to the ‘vastis’

Naaz: What problems did you face while conducting the survey?

Manjusha: Other than the trekking, we had problems with the language. The locals had their own dialect of Marathi which we at times could not understand even though we knew Marathi. The mothers there were not educated and were not aware about their children’s school life. Some of them did not even know which standard their child was studying in and were doubtful about the age of their children. All they knew was that if they sent their children to school, their children would get lamps as well as free food in schools. Initially they did not understand the purpose of our survey. They thought we were representatives of the government who have come to hear out their problems and give away free medicines. However, they were eager to share their thoughts with us and were also very interested in our products. They felt nice as they could talk to someone who would understand and listen to their problems.

Naaz: How did you feel while talking to the locals?

Manjusha: We felt like royal people! We were treated with so much respect and kindness. When we went to the vastis we were given chairs to sit and were even offered tea and snacks! Even though the vastis did not have these facilities they were polite and really believed in the concept of ‘Athiti Devo Bhava’. It felt great being associated with ‘Million Souls’ and the NGO, BIAF. A sense of satisfaction was felt for doing such a noble cause. This experience made us retrospect about our own lives. These people did not have electricity, no proper facilities to study, no sanitation, no cleanliness, no transportation and yet they lived their lives without complaining. In fact they were grateful for what they had and valued everything that they owned. The parents there, illiterate themselves, had big ambitions for their children. They wanted them to study and lead better lives than them. It was an eye-opening experience. 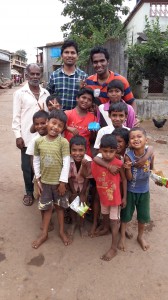 Naaz: What was the funniest moment there?

Manjusha: As I said earlier, we were treated like royalties! We were like celebrities, actually. We had a crowd following (mostly little children who were fascinated by us) and everyone wanted their pictures to be taken. Siddesh became very popular with the little children there. He sacrificed his Oreo biscuits for them. He gave away all the extra snacks which we had to those children and the smiles on their faces made the visit worthwhile. 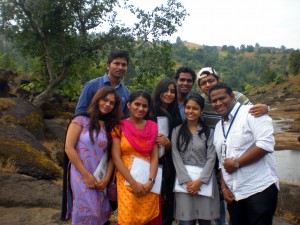