Thursday was a day to forget both for me as well as Team India. It was a cruel day for me as I had to literally seat under duress for two and a half hours (Mind you not exam stress but anxiety of the big SEMI-FINAL between India and Australia!!).With every jubilation in the background my attention used to get more diverted from the paper and my mind used to wander off towards the match with questions like “How many Australian batsmen must have perished??” “Have India succeeded in restricting Australia under 300?.” The noise and excitement was the indicator that a wicket had fallen and I was literally counting the number of dismissals in the middle of a paper….Just Imagine my audacity!! Suddenly with the ‘dead silence’ I realized that time is running out for India as well as me….Both me and India had been set a mammoth target to chase…For me 24 and India 328..The question paper was akin to Johnson and Starc peppering with bumpers and literally bullying me!! My misery finally ended after two and a half hours and I finally heaved a sigh of huge relief not that my paper had gone exceedingly well but now I could divert all my attention towards the match with no baggage of further exams(unlike a few unlucky ones who had a semi-final of their own the next day!!). When I reached the hostel there was hardly any space to breathe let alone seat. All were glued to the television with Dhawan going berserk but unfortunately that spark was short-lived as Dhawan caressed the ball only to find the lone fielder at deep extra-cover. Suddenly there was stunned silence in the TV room and a plethora of nervous faces!!In came Virat Kohli with a huge reputation on his back. He had been the lynchpin of India’s historic chases but unfortunately his 13-ball short journey came to an end against a fired-up Johnson. Soon Rohit Sharma followed suit after threatening to repeat his quarter-final heroics.

With every wicket the TV room was getting emptier. People walking away with dejected faces but I stayed put telling myself,” MS Dhoni is still to come!!” At the fall of the fourth wicket more seats became vacant. The room was more like a theatre showing a Ramgopal Verma Movie but still I stayed put saying to myself, ”People who left are fools. They are discounting the powers of this man(Dhoni).”.Rahane too went in keeping pace with the sky-rocketing run-rate. India required now about 100 runs in six overs and that still they were given a one percent chance is testimony to Dhoni’s greatness but Johnson had made it too steep for him. He had already taken it away from Dhoni and Co. But still the heart wasn’t ready to budge. It still harbored hopes of a Dhoni Miracle but my mind knew it was all over. Dhoni’s wicket was the final nail in the coffin for India as well as my heart. To be honest India came up short against the depth and range of their oppositions batting line-up. Add to that the fiery trio of Starc, Johnson and Hazlewood who were relentless in their pursuit of wickets hardly giving the famed batting line-up any freebies. For Team India to reach this far is an achievement in itself given that nobody gave them a cat in a hell’s chance at the start of the World Cup and I can bet you that this young team is destined for some special feats in the forthcoming tournaments.

The news tabloids and the armed-chair pundits will introspect India’s defeat like they always do and bigot-minded People will shred them to pieces but I as a passionate Indian Cricket fan vow to stand by them through the thick and thin.

India couldn’t come unscathed in its pursuit of 328.Hopefully I may have done enough to surpass that all-important, career-defining (or breaking) landmark of (Sweet 24)!! 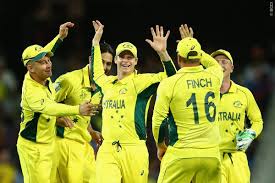 WILL UNITED LIGHT UP THE ‘CITY’ AFTER CHELSEA STALEMATE