They say that fairy-tale endings are fictitious. Nonsense would say Clarke as on a dazzling night in the biggest ground in World Cricket, 93,013 people watched Australia stroll past New Zealand to win their penta, their fifth World Cup . First over set the tone for me when Starc got the better of the New Zealand skipper with a breathtaking delivery. Mcculllum had been a bowler’s nightmare up until now but Starc reduced him to mere mortal. It was certainly a psychological blow for the Kiwis as they never looked like wresting back the initiative from their Big Brother. Ross Taylor and the hero of the first semi-final Grant Eliott huffed and puffed their way back into the match only to fizzle out in the end. Faulkner got rid of Ross Taylor who was just on the verge of exploding after a scratchy innings and then he cleaned up New Zealand’s powerhouse Anderson. New Zealand suddenly became powerless in the powerplay and Elliott too succumbed to the guile of Faulkner. A target of 183 would have revived memories of 1983 for the New Zealand fans but Warner allayed any anxieties that may have been prevalent in the Australian camp. He set the tone for the chase and at the time of his dismissal Australia were way ahead on their path to glory. Clarke who was playing his last ODI and Mr.Unflappable Smith ensured that there were no further histrionics and took their team past the finish line. 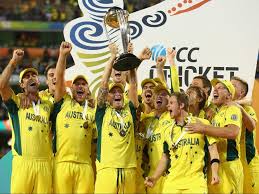 This comeback was a miracle of sorts for Michael as his career was thought to be over when he tore his hamstring during the 1st test against India. Instead that proved to be the start of his second wind. He went under the knife and his recovery time was slated to be three months but such was his desire and will power that he was back on his feet in two. During that period he was not the most popular amongst the Australian Public. His hamstring became the talking point throughout the Australian summer to the dismay of many. He received a lot of flak for the way the whole situation was handled. Yes, this magnificent Australian team would have won even with ACP Pradyumand at the helm but credit should be given for Clarke’s drive, determination and his passion for the game. Steve Smith showed tremendous nerves of steel throughout the tournament and many teams got fed up finding a weak zone against him. This Australian team would always be maligned for their exhibition of boorishness but no one can take away the class of their team and I hate to say this but this Australian unit will continue to rule the roost for the next five years or so unless a strong outfit like the West Indies of the 1970s emerge to halt the juggernaut. Coming to New Zealand I think they were overawed by the occasion as the MCG factor also played its part which is the modern day Colosseum. Mccullum inspired his men to embrace what they will look back on as the time of their lives. The terminally-ill Martin Crowe who wrote an emotional letter to Mccullum’s team in which he termed Ross Taylor and Martin Guptill as the “two sons I never had” had the time of his life. “I will hold back tears all day long. I will gasp for air on occasions. I will feel like a nervous parent. Whatever happens, March 29 at the MCG will be the most divine fun ever,” wrote Crowe in his heart-touching letter. It really was a pleasure to watch this team soar to the summit until the heartbreak at the MCG. This magic will now prompt a shelf to be reserved for cricket in a cupboard full of rugby.