From the land of MaharanaPratap!!! 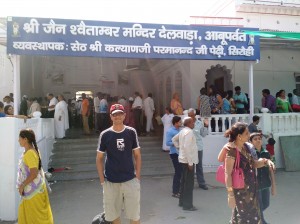 Life throws up surprises at every point in life!! In order to experience those surprises you need to get out of the cocoon that you are shielded in!! I decided to burst the bubble and take a break from the hustle and bustle of everyday life!!Destination-Mt.Abu

The exorbitant Tatkal rates prompted me to make a flight journey to Ahmedabad.(As if one section of the train is gold-plated!!). Travelling in an auto from an airport with a meter is similar to monsoon in Rann of Kutch. Taking into account all the factors I agreed to the sky-rocketing rate of the Rickshawalla. I was bereft of any choices so late at night. Thankfully I reached the desired destination without too much of fuss. Instead of feeling fatigued I was pretty energetic and pumped up with the excitement of leaving for Mt Abu the next day. To add to that excitementmy ever colorful friendenquired whether I would be comfortable sleeping on the terrace.I was flummoxed at the start but then decided to give it a try.Thanks to my Giraffe-like limbs Icouldn’t fit on the mattress. I twisted left, turned right and tried every damn position humanly possible before I finally gave up and decided to march back to the room. But the room was as hot as the model that has raised the mercury levels on social media and I was profusely sweating without breaking a sweat. Finally I donned the role of an insomniac and was just biding my time sitting idle waiting for the clock to turn 5:40. Just when my eyes started to close down out of weariness my friendknocked the door and all my attempts to sleep drained down the water.

Weleft for Mount Abu early in the morning by GSRTC. The state of the bus was deplorable and the bus was in desperate need of Swach Bharat Abhiyan. We completed the 3-hour journey in 6 hours and it was an accomplishment of sort. The bus driver was so infatuated by bus depots that once we commuted the same bus stop twice. I was “feeling the heat” but somehow managed to KEEP CALM!!We finally heaved a sigh of relief on reaching Abu Road. Now the next endurance test was to reach Mt Abu from Abu Road. The options were very limited. Either travel by bus and reach Mt Abu at around midnight taking into account the hilly terrain and the appalling state of the buses and the other option was a jam-packed jeep whose driver was very keen on making use of the every available mm of the jeep. So we decided to explore the jeep option. My heart was in the mouth for most of those 20 kms and I heaved a sigh of relief when we finally managed to enter the footsteps of Mt. Abu after a tiring journey. Just as when I thought all was going to be hunky dory after a horrendous start to the tour I was proved wrong. To our dismay the bike broke down after our visit to Dilwara temple.Dilwara Temple is an architectural wonder and a tourists’ paradise. What I liked about the temple was its grandeur in plain simplicity!!Our next destination was Gurushikhar but the rental bike’s health was akin to a man on a ventilator and it took his last breath thankfully besides the bike rental shop. There were hardly any choices left in us. All his vehicles were terminally ill. We just had to choose between which would last more. Keeping our hands close to our heart we placed our faith in Chetak.The adventurous scooty ride towards Gurushikhar was one of the highlights of the tour. It was a conglomeration of towering mountains, surreal landscapes and unadulterated air!!Sunset Point was bit of a downer of the entire tour. It was more of a Monkey Point rather than a Sunset Point!!I have a hate-hate relationship with monkeys particularly after the fudge incident where from nowhere they attacked me and snatched the whole packet of fudge out of my hand only to spill it in the end!!

After the hilly destination of Mt Abu our next stop was the tropical region of Udaipur.The roads in Rajasthan are exemplary and for a moment it would give you a feel of Singapore or Europe and one peculiar thing about the highways in Rajasthan are its emptiness. For a Mumbaikarthis is an estranged scenario. What typifies Udaipur is City Palace constructed on the banks of the lake Pichola. City palace is certainly one of the costliest historical monumentsin India. 250 bucks for an entry pass literally set alarm bells amongst us. Add to that 100 extra that we had to shell for the guide thanks to the maze like structure of the Palace. The sprawling complex with its gorgeous buildings and marvelous collection of arts and relics is without parallel in Rajasthan.It is considered the largest complex in Rajasthan and is replete with history. The story behind the existence of the palace goes way back ages into the past. They say that while MaharanaUdai Singh was on a hunting trail he met a hermit who was meditating on the hill above the Pichola Lake. Maharana sought the blessings of the hermit and the hermit advised the Maharana to build the palace at the very spot.It was a herculean task to complete the entire palace especially after the Rajasthani cuisine comprising of Rasgulla, Dal Bhatti and various other delicacies that we filled our yearning belly with!!

We also gave a visit to the ChetakSmarak which symbolizes the bravery and valour displayed by MaharanaPratap’s horse Chetak. Our biggest accomplishment of the entire tour was withstanding the scorching heat of Udaipur and we bid adieu to the land of Maharana Pratap on Sunday Morning. The bus journey en-route to Ahmedabad was a smooth one as compared to the Mt Abu odyssey and I reached the –Airport. The prefix before the Airport is easy to guess if you are well-versed with Gujarat. I almost reached the airport 5 hours before take-off taking into account all the permutations and combinations which a country like India could throw up.

I managed to cross paths with an interesting personality at the airport. Such was his technical prowess that he constantly bombarded me with all the latest technologies of which I had no clue whatsoever(Mind you I have a prestigious degree in that Domain!!). Every word of his was sounding Greek to me. Somehow I managed to divert the topic and the discussion went from one side of the spectrum to another. Topic-Online Dating!!I was astonished to hearwhen the guy told me that he had come all the way from Delhi to meet his ‘virtual’ soul mate but only to be spoilt by his soon to become father-in-law!! ‘Love is indeed blind’ I had heard but never experienced!!It was nice to pick his brains and the take away from the entire journey was ‘online dating’!!Perhaps not a bad option to explore in the future!!