When New Zealand put their foot on the England shores there was hardly any talk of them. The old love triangle KP-Strauss-Cook with Tom Harrison playing a supporting role hogged the limelight. Even the press conference before the Test Match was full of KP, KP and only KP. England team must have been fed up with the fiasco by now .It has been dragged on for too long with no definite outcome still. 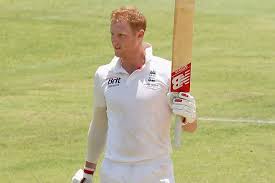 Lord’s witnessed a typically un-English performance. Maybe the shadow of KP spurred them on. Maybe the arrival of new management. It was a slugfest with both teams throwing punches at each other right from the word go. England was in doldrums at 30-4 and the Pietersen bandwagon was all over them on social media. Then there was an unusual twist to the entire tale. Resurgence of Ben Stokes. His Bothamesque innings knocked out the wind of New Zealand bowlers. He and England’s newly appointed vice-captain bailed England out from a deep hole and the honors were shared on day one. New Zealand skittled out the English lower order and was in pole position at the end of day two. New Zealand’s time was now to heap more misery on Alastair Cook and enhance their reputation even further but they failed to wrest the initiative. Lead of 134 was substantial but not match-winning. Fourth day was a day of contrasting centuries. This lad Cook is really a hard nut to crack I must admit. The social media were gunning for his head. He had become the laughing stock of World Cricket. Form had deserted him for the past two years. Any weaker personality would have stood down given the circumstances. But Cook stood firm and reaped the rewards with a valiant century He had a dream final day. Everything that he touched was turning into gold. Bowling changes, fielding changes and more importantly a much needed victory after a hard long battle. Again the real protagonist of the fight-back was Durham all-rounder Stokes. After Root and Cook had pulled out England from another messy situation it was Stokes’ belligerence that put England in the driving seat. He took the game away from New Zealand in the blink of an eye. It rubbed off on his bowling performance as well. The big banana inswinger to get rid of Baz was certainly one from the top drawer.

Ben Stokes is box-office and he could have major ramifications on Cook’s captaincy stint later in the summer. England has certainly unearthed a gem and they must find a way to keep it unpolished.

This performance was a breath of fresh air and I certainly hope it is not a flash in the pan. Yes, the ECB has mishandled the whole KP situation and now in all certainty he is lost to English Cricket. It was an abject failure of mis-management from the ECB. Even now if I was Andre Strauss I would still trust a Kevin Pietersen rather than a Gary Balance. If somehow the marriage is revived and KP is reinstated in the team then this English team could be a handful against Australia. For test cricket to sustain it needs a stronger England and we might have one if these are the signs to come. Even though England has an aversion for dynamic and free-minded cricketers their major achievements have been architected by inspirational and flamboyant performances. It was Andrew Flintoff in 2005 Ashes, Pietersen in 2010.Will 2015 be Stokes’ year of recognition??