Peek into the life of Piku…… 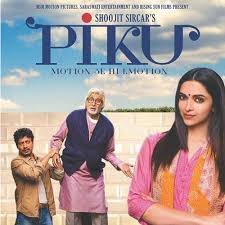 Peek into the life of Piku……

My family usually is averse to watching movies. My mother doesn’t have any major liking for movies while my father who is one of Amitabh’s biggest cheerleaders isn’t impressed by the current crop of Bollywood actors, so watching a movie with my parents has always been a rarity for me.

On a usually humid Wednesday evening when I came back huffing and puffing and with a sense of weariness on my face tolerating the Mumbai traffic, Dad sprung a surprise which took me aback for moment. ”We are going for Piku tomorrow. I have booked 3 tickets“, was his bomb in a calm voice. All my fatigue just drained away in a flash.

The movie has many talking points and constipation is the peripheral part of it. The movie encompasses a father-daughter relationship in a subtle way and manages to portray how a daughter in spite of a rigid, cocky and crotchety father still manages to bear all his shit and give in to his demands. She half-heartedly devotes her life to the service of her eccentric and stubborn father. He is selfish and has no qualms in talking about the virginity of her daughter and he uses it as a mean to ward off potential suitors. In his selfishness there is some soft corner too. He wants his daughter to be self-dependent and is of the opinion that it is of “low IQ” fora woman to get married and devote the rest of her life to her better-half.

Piku is a breath of fresh air from the conventional melodrama or different versions of love story which is apparently the current trend. That the movie was able to overpower the IPL, is a 100Cr in itself.

Irfan Khan’s one-liners were nice appetizers to the whole daughter-father relationship and have managed to seek the attention of the viewer’s even when he has less room to maneuver. Rana Chahudhary (Irfan Khan) actually makes the movie come alive with his confident and effortless million-dollar expressions and is the glue of the entire road journey by offering different perspectives. The standout scene being the pointed look at Deepika when her servant occupies the front seat.

Movie has numerous connotations woven in the dialogues. It will make you guffaw in a few situations and make you weep in a few. It is a roller-coaster of emotions.

Deepika Padukone has done full justice to the role of Piku and there is an awful of lot to appreciate and love about her in the film. In fact even Amitabh has rolled back the years and his vintage voice doesn’t look like toning down any time soon.

Sircar(Director of Movie) clearly is enamored of body fluids as was the case seen in his last movie “Vicky Donor” where sperm was the talking point.

Clearly a thumbs-up to this film and the movie is much more than the animated discussion regarding ablution.