Last year’s Champions Div B would look to repeat their heroics this year as well. They are reminiscent to Real Madrid’s Galacticos and unlike Real they play as a unit. Their Japanese recruit will again be the focal point of their attack and others will play around him. The statutory warning is that “If you give him space he will murder you all day long!!”. It is also going be a litmus test to keep up with his pace as the player who is marking him is guaranteed to lose his weight by minimum 10 kilos. 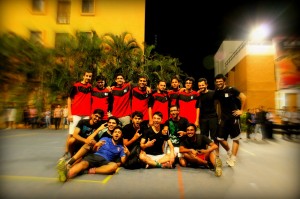 The only Achilles’ heel which I can think of is their goal-keeper otherwise they have got all their bases covered. Praful kalla is a rock at the back and opposition need to have something special up their sleeves in order to deceive him. Shibhasis and KD form a potent partnership and their silky passing is a delight to watch for the neutrals. Div-B without any shout would start as the overwhelming favorites and someone will have to play out of their skin to snatch the title from them.

Div D is too reliant on Nikhil Thakur for my money and their rivals would know that if they can keep him quiet than “Job Half-Done”. He has the physique to outmuscle the defenders and with the added advantage of pace and guile he is certainly going to keep the opposition on their toes. Others would have to complement him if Div-D are to make any further in-roads in the tournament.

Div A and Div D are almost brothers-in-arms as both share the same set of problems. They too are almost a one-man army and are heavily dependent on Ganesh to provide some spark but the added advantage is that they have a calming influence of Prashant at the back who is a complete “no-nonsense” defender. They missed the bus to semis only by a whisker last time and would surely look to make amends this year.

Div C look the weakest of the lot and are the underdogs but they certainly would have something to say about the tag. They have nothing to lose and could don the role of party-poopers for some of the teams.

It would be interesting to see how the newbies shape up against their senior pros and who knows a surprise here and there could completely upset the applecart. It remains to be seen whether any team has the gusto to rise up to the level of Div-B or will Div-B have their own merry way??