Div A strolled their way pass their junior counterparts to a thumping 7 wicket victory. Division A had to hardly break a sweat and it was just a normal evening walk for them. Next match was a pulsating one as Div-B skipper (Shibashis) snatched victory from the jaws of defeat to take his team home. Their supporters certainly had their hearts in the mouth as their team required 7 of the last over but Captain cool took a cue from the original Captain Cool(Dhoni) and also finished in his signature style.

Div C made a resounding statement in the tournament by pounding Div-D Juniors. Gaurav Pawar was the star with both bat, ball and sledging as he was the main protagonist behind the team’s stupendous performance. Bahubali Venky too chipped in with a cameo performance as he galvanized the innings for his team. After putting a hefty total on the board it was always going to a herculean task for Div- D juniors especially against the Gujarat Express Priyank Patel. As expected they folded up pretty cheaply in the pursuit of 68. 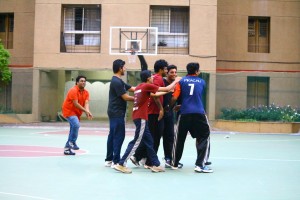 A surprise was in store late evening as Div D were shocked by the less-fancied Div C Juniors. Div D got up on the wrong side of their bed as they were completely surprised by the penetration and verve in the bowling of their junior counterparts. It was certainly a day to forget for Div D’s batsmen as they looked the replica of last year. Their fielding bore the look of Pakistani fielding unit. This is certainly a blip and their oppositions should not peep much into this performance as unarguably they have the best two players in the tournament and one should write them off only at their own peril.

Div B seniors beat Div A juniors by 5 wickets

Div A seniors beat Div B juniors by 7 wickets

It was a normal day in the office for Div A and Div B as they kicked started their campaign with 2-0 victories respectively. No prizes for guessing who the scorer was for both teams!!

Div B seniors were in such cruise control that their goalkeeper almost looked invisible. They hardly looked troubled at the back and Yusuke even rotated his players almost at his own whim. It was certainly a footballing lesson for their junior counterparts.

Div D juniors made some school boy errors and almost gave away their advantage to Div C seniors but thankfully Div C seniors couldn’t capitalize on their shoddiness and that resulted in an early setback for Div C seniors. The picture doesn’t look rosy for Div C and they would almost need to play out of their skin just to stay in the group.

Badminton turned nemesis for Div D seniors as they were handicapped without their skipper Nikhil Thakur. Although he turned up for the match, he was nowhere near his menacing best. Defense was impregnable though as Sarvesh played like a true warrior clearing every loose ball. 0-0 would not be such a bad result considering the circumstances but they certainly need to shore up their attack against more skillful and equipped teams.

Div A Seniors 2-0 Div B Junior

Div B Seniors 2-0 Div A Junior