Sporting Carnival of SCIT(Review of the Senior Titans)!!

After a shaky start Div D was back to their bullying best especially with the ball. Motivated by the inspritational words of their otherwise poker-faced skipper Gaganjot, Div D has hardly put a foot wrong in their last couple of matches. They have certainly found the winning formula, “Put the opposition under the mat with the bowl and hunt down smaller totals.” Bowling troika of Rachit, Ashish (Yorker) and Gagan have given the opposition sleepless nights. The most flattering thing about these three is that they offer varying challenges to the opposition. Yorker is relentless with his toe-crushers. Gagan bowls in that corridor of uncertainty which is awkward for any batsman to face. Rachit has a fast-arm action which deceives the batsmen in the air more often than not.The only worry is that their lower order hasn’t been tested and in a pressure-cooker situation do they have the temperament to take the team home remains to be seen.Gagan’s captaincy too has been astute. He has not been afraid to go for the jugular and has undertaken a predatory approach in this tournament. He would certainly want to round off this tournament with a silverware.

They are the team who can give Div D a proper run for their money. They have Sachin (The name says it all!!!)who is a monster with the bat. He displayed his six hitting prowess where he took a liking to one of the juniors’ and pounded him for 4 sixes. The cool and calm Nambiar is also no mug with the bat. If you ball him on his pads then he will take hammer you all day long. SJ and Sareen look settle at the top with Bhalerao providing the impetus at 3. Overall they are a well-oiled unit and they certainly have the wherewithal to upset Div D if both the teams clash in the semis.

A team which is too top-heavy for my liking. If their top-order falters then their lower order is too fragile to put up a score on the board which was evident in the match against Div A Seniors. Venky and Akshit complement each other very well. Venky is a monk with the bat whereas burly Akshit is  flashy and more of a dasher. Pawar Power would also need to come to the party and along with Priyank these four have to form the bedrock of Div C’s batting. Lower order bears a sorry look and their bowling  is too one-dimensional and can be picked off easily. Their road till the semis was pretty straightforward but from here on their path looks too steep and they would require some inspirational performances from the aforementioned players to take them past the semi-final barrier. 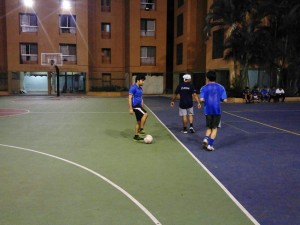 Div A have a hurculean task on their hand as they are most likely to face the tournament favorites in their semi-final clash. They simply can’t go into the match with the mentality of not conceding otherwise Div B will put them to sword. How they organize themselves and plug all the gaps would prove decisive in the outcome of the match. They simply have to work their socks off and hope against hope that somewhere in those twenty minutes they would see light at the end of the dark tunnel. Ganesh will have to bring his A-game to the fore and the others will have to follow suit. Prashant will have to shoulder the bulk of responsibility at the back and be that rock . Div A should certainly see this as an opportunity to make a name for themselves and prove that they are no push-overs as they have nothing to lose and everything to gain!!

I am falling short of words to describe this team. They have just bossed their way to the semis without even getting stretched. They are getting better (I guess better is an understatement) with each and every outing. These are some warning signs before a major Tsunami. Yusuke’s leg is proving to be too hot to handle for some of  the opposition defenders as they had had to bore the brunt of his bazookas (Yusuke has certainly increased the sales of the magic sprays and Iodex!!). Unless and until Div B commit some suicidal blunders (which I don’t see happening) their ship is almost certain to sail to the summit on a smooth sea. One more thing praiseworthy about Yusuke is that he has shuffled his cards pretty well and has not been predictable!!He has not been averse to experiment at the back which shows his open-mindedness. Second consecutive Independence Cup beckons for them and is certainly theirs to lose!!