Euphoria for one and Despair and frustration for the other was the moral of today’s semifinal. Lion-hearted effort from Rachit wasn’t enough to take Div D over the line as Saurav Jain kept his nerve in the final over. It was sort of a boxing match as both the teams were throwing punches at each other. In a high intensity semi-final match the line between victory and defeat can be very thin. Ultimately, the extras that Div D bowled proved fatal for them as that proved to be the difference in the final outcome. Div A started off very sedately and diligently. Barring a few extras (Rather few is an understatement!!), Div D gave away very little. The wicket of Sareen proved to be a blessing in disguise for Div A. Sachin injected some much needed power-boost to their engine by hitting some lusty blows. He took the stuffing out of Div D’s heartbeat Tandon and gave the total a more than a respectable look. Chasing in a knock-out match is always a bit tricky. Openers have to set the tone. In contrast, Div D’s start was a forgetful one. Adding to their woes, the run-out of Gagan was a body-blow and a huge turning point in the match. Signs were looking ominous for Div A when he stroked a delightful hook shot but an unnecessary confusion in the next over proved to be his downfall as rub of the green went Div A’s way in a 50-50 decision. There were 2 versions of Rachit in the match. In his first avatar Bat was searching for the ball rather than hitting hit. He got his mojo back (in his second avatar) when he changed his bat at the half-way stage but it was too little too late for Div D. Parmar and Rachit gave some life to dwindling hopes with a handy partnership but Parmar’s wicket again shifted the tide in Div A’s favor. The equation boiled down to 20 from the last over with Rachit on strike. His twin boundaries again gave a new lease of life to Div D (Div A heart was in their mouth at that stage!!) but a fairy-tale ending wasn’t to be for him and Div D. 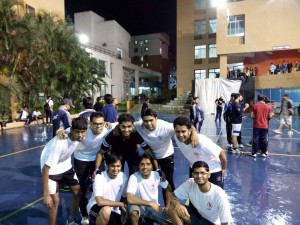 At the end, Div A were the deserving victors. They won the important moments and had an iron-grip for most of the match. They just didn’t allow Div D’s batsmen any breathing space  plus they were disciplined.

The final has all the ingredients of being a crackerjack of a match. It has all the makings of an enthralling encounter. Again for Div C the ‘Big Four’ will have to step up to the plate. Venky will as usual have to play the anchor’s role to perfection and others will have to play around him. Bowling looks a bit thin but if the toss of the coin go in their favor then it will certainly even up the contest. Can Venky inspire his division to victory or will Div A fresh from a morale-boosting victory have the last laugh??

Elsewhere in Basketball Sarvesh and Co. scripted a famous victory over Div B.Last year’s champions showed their mettle in a tense encounter. The match was too close for Div D’s comfort as Himanshu’s 3 pointer proved to be the spoiler for Div B. Div B should be applauded for their tenacity and doggedness as they managed to take the match to the wire against a star-studded Div D while Div D continued their dominance in the sport which is their bread and butter.