Final match between Div A and Div C had the TRP of a Salman Khan Movie. This match had attracted and raised the most eyebrows. Large crowds had thronged the multi-sports arena. Div A won an all-important toss and opted to bat first. They lost the wicket of their opener SJ but Ashu and Sareen settled the nerves in their camp as they played some intelligent cricket until Ashu got out to a rash shot. Suddenly the tide turned in Div C’s favor as Venky got rid of the big fish Sachin. The wicket of Sachin Patil invoked vociferous celebrations from the Div C faithful. Nambiar hit some hefty blows to take total to a respectable one but a spate of run-outs in the end meant it was advantage Div C at halftime. The total was a bit tricky considering the enormity of the match.

There was a twist in the tale as fired-up Div A made some early inroads into the Div C line-up. They were four wickets down for almost nothing and were in a big spot of bother thanks to some foolhardy running by Kaustubh and Akshit. Venky and Priyank held the innings together after the early stutter and took their team home without any further histrionics. 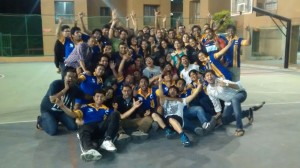 Priyank Patel, donning a No. 7 jersey replicated the same ritual usually performed by India’s One-day Captain as Div C put in a stellar performance to defeat the boys from Div A. Mind you they were on the ropes when they lost four quick wickets but the ever-reliable duo of Venky and Priyank played some judicious cricket to take their team home.

At the end after a long and enduring Independence Cup it was the Cricket which came out trumps. Both teams played some outstanding cricket to reach the finals but at the end someone has to end up on the losing side and sadly for Div A they had to suffer that ignominy of defeat. All credit to Div C for putting on a stupendous show and this victory was certainly a salute to their spirit and doggedness as before the start of the tournament they had problems even forming a team, let alone play.

In the girls’ box cricket game which was a new feather to the crown of the tournament, the senior D division girls bagged the cup after playing an enthralling nail-biter match against worthy opponents A juniors that went down to the last ball to demarcate the victorious team. The junior A decided to bowl first winning the toss and picked up the three top line batsmen within the first two overs itself. The situation was really irksome for D seniors and it was seemingly very tough for them to last the entire 5-over innings. However the much needed support came from the batsmen at the fourth and fifth positions who kept the scoreboard ticking by taking singles constantly and took the team upto a defendable total of 22 runs. The second half of the match too witnessed a great show of sportsmanship and gallantry on part of the two teams putting up a very close fight that was only won by an inch. The bowlers of the D seniors did a great job plucking off the top two batsmen of the A juniors through their pace bowling coupled with tight fielding and co ordination. In spite of the tight situation the batsmen on field hit two fantastic boundaries to enhance the competition to great heights. The match boiled down to the last ball that required just two runs to announce the A juniors team as victorious, but the amazing spin bowling by the bowler of the D seniors did not let any runs to be made crowning the D seniors with the honor of being the champions of the box cricket grand finale. 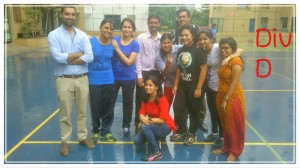 Elsewhere it was a day of great upsets in other sports. Div D the perennial outsiders, punched above their weight to beat Div C, the overwhelming favorites, in a roller-coaster match. Sagar Parmar and Div D skipper Prasad Yalliwal played some sparkling volleyball to surprise Div C who were found wrong-footed.

In the second set, Div D missed a golden opportunity to close out the match where they had 4-5 match points and allowed Div C to claw their way back into the contest.

In the third set, Div C were bossing the first half of the set as there were some tired legs in Div D’s ranks. Div C had a substantial lead of around 6 points. But then came a huge turning point in the match, Sagar Parmar was handed the serving duties and Div C had no answer to his flat smash serves. Sagar completely changed the complexion of the match and there was no looking back for Div D from that point onwards. Div C were found wanting and searching for answers and couldn’t find one till the end. Unlike the previous set, Div D sealed the match without any further drama and the match gave a sense of Zimbabwe defeating Australia.

This was the most jaw-dropping results of all as Div B’s bastion was conquered by the juniors. They came back from dead to upset Div B seniors. Div B seniors were cruising at one stage with two goals up but out of nowhere junior team reduced the deficit to one goal with a long range stunner. That goal set panic amongst the ranks of Div B and suddenly they lost control of the match. Juniors stepped up a gear in their performance and that extra effort paid rich dividends as they struck another demoralizing blow to Div B. The equalizer raised alarm bells in Div B camp and normal fluency in passing disappeared. In the last moments they looked shaky at the back and juniors capitalized on it as they completed the turnaround by smashing the third goal at the back of the net showcasing tiki-taka of their own.

Thus this capped off the two weeks of pulsating and nerve-wrangling drama and entertainment. Credit goes to the SCIT Sports Co-ordinators and the Chief Organisers (Gagan, Ashish and Neha) and all the other relevant stakeholders who worked their socks off to make this event successful.