The clash for the most coveted prize of the Champions League was billed to be a high voltage contest but it turned out to be a lop-sided one.

It was a stroll in the park for the boys from SCIT as they made short work of a paltry total(30 runs) set up by their supposedly more favored(in all fields!!) peers from SCMHRD(Not Sure in Cricket though looking at the performance!!). The match was sort of an anti-climax considering the enormity of the match and it was certainly tipped to go right down to the wire. 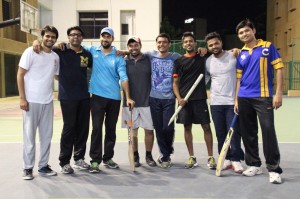 HRD made the attack of SCIT look like the class of Lille and Hadlee at their pomp. They were like rabbits found in front of the headlights. It was a complete lack of intent from them as not a single batsman dared to pull the bull by its horns. As an outsider they looked engulfed with fear and a muddled minded. Their running was far from sure and the most of their shots lacked intent. Full Credit to Ashish and his boys. They sensed their prey just like a hungry lion and fully capitalized on the shortcomings of their oppposition. Both innings were like chalk and cheese. When SCIT came out to bat they looked in cruise control right from the start. They made sure that opposition wasn’t allowed a sniff in the match and Gaganjot completed the last rites gleefully. Gagan’s innings was a package which included his full array of shots. His signature swivel and pull was also on display and he went on a six hitting spree in the second over. Saurav Jain also played sensibly and made sure that the big-hitters like Sachin and Jatin had a field day !!

It was certainly a performance from the top drawer by SCIT and a moment to rejoice considering the disappointment their fellow mates had to face in Football and Volleyball.