I am glad to inform you that my book Being MSD was published on 8th August 2015 at the hands of Former India Captain Dilip Vengsarkar. The book encompasses the professional Career of India’s most successful captain MS Dhoni in the form of short articles. I have kept Dhoni as the focal point and have covered each and every series right from the time he made his debut to the Champions Trophy which was held in 2013. I have mostly dwelled into his cricketing aspect. There are 2 sections in the book after every article “Know the Unknown” and “Life Beyond Cricket” that highlights some interesting facts about MS. For all the cricket fanatics,the book will sort of a recap of all the sweet and sour memories during his tenure as Captain as well as Non-Captain. On the other side for those who are newbies to the game it will be sort of a fresh perspective of MSD’s career or rather Indian Cricket in general.I would be very happy if the book provides even 1 percent of the actual MSD entertainment. 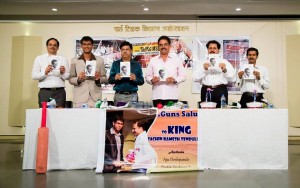 The following are some of the excerpts from the event.

” Now a days good cricketers are found  not only from big towns of Delhi, Mumbai ,Bangalore, Kolkatta and Chennai but also from rural areas of India. Dhoni is one of them. He was calm and cool  when he started his career and never got overexcited or overwhelmed by success. He remained as composed in failures also. I decided to make him India’s captain due to  this extraordinary quality of his. He is still absolutely down to earth” Dilip Vengsarkar , Great batsman and former India captain was speaking at book  release function of BEING MSD. Colonel, as he is popularly known, also promised to give the book to MSD.
” Pratik should pursue his professional  career along side and keep writing  more books. It is always apt if  engineers become writers because they can analyse well” said famous cricket columnist of Mumbai and ex Chief Engineer in BMC Shri Dwarkanath Sanzgiri  at the book release ceremony.

The function was held on 8th August at Vileparle Mumbai and was attended by other  eminent  persons from  field of cricket and literature as well.This is also my second  book  as an  author. I also co-authored  ” Two hundred slogans salute to king  Sachin  Tendulkar” which was awarded a  place in Limca Book of Records 2015 for creating national record on slogans.