Fitbit- The New Sports Gear in the Indian market

The degree to which technology is deep rooted in our lives can be benchmarked by the new sports wearable in the Indian Market – The Fitbit. Fitbit is a wearable technology device used by an individual to measure the number of footsteps walked and climbed and also personal metrics such as the quality of sleep and heart rate.

On 25th August 2015, Fitbit Inc. entered the Indian market by launching three new fitness bands namely “Fitbit Charge”, “Fitbit Charge HR” and “Fitbit Surge.” Apart from these, Fitbit flex, Fitbit zip and Fitbit one have also been launched on a small scale. Primarily these bands were launched on Amazon India in June but now they are available across various stores in India. India is the 43rd country where Fitbit Inc. is launching its range of sports wearable bands.

The Fitbit bands can be synchronized with Android and iOS devices using the free companion application that includes all the exclusive features you would expect from a fitness device. A Fitbit can accurately track stats such as steps taken, distance travelled, calories burned, and stairs climbed etc. It has got a bright OLED display monitor that adjusts its brightness according to the surrounding illumination. It also comes with a silent vibrating alarm and also shows call notifications and is textured in such a way that you can comfortably wear it all day all night. The band offers 7 days of battery life. These wristbands also measure your BMI and body fat percentage over time. Based on all the statistics obtained a long term overview is generated that states the progress and required developments of the individual. 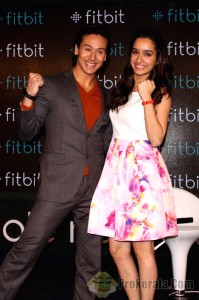 In  India, Fitbit has roped in actors Shraddha Kapoor, Tiger Shroff and badminton player Saina Nehwal as brand ambassadors to promote the product.

“There is a clear trend emerging across India with people aspiring to improve their health and fitness as high rates of chronic conditions, such as obesity and diabetes, are compelling them to look for new ways to reinforce healthier habits,” said Woody Scal, Chief Revenue Officer, Fitbit. As a part of their marketing strategy, Fitbit is investing in television commercials, print and digital advertising in India. According to Gartner, Fitbit has sold 4.5 million health and fitness devices in the second quarter of 2015, raking in USD 400.41 million in revenues.