Super-Sunday turned out to be a pretty dour one for the Indian fans as India resigned to a resounding South Africa in the final ODI. The defeat left many questions rather than answers for Dhoni and Co. First pertinent question is the fast-bowling, may I be allowed to say military-medium? 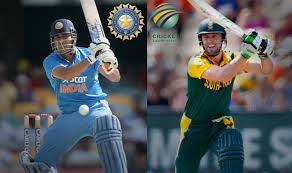 Enough of the persistence with the pedestrian bowlers. Need some genuine fast bowlers!!It is highly impossible to concede 400 runs with the rule changes. Our bowlers needs to bear the bulk of the flak. It is the bowlers who make the captain silly or great. All the plans decided before the match go haywire if the bowlers dish out juicy half-volleys and full-tosses. Batsmen like Abd, Faf Du Plessis feed on such deliveries. Once they are set there is no need for a second invitation to go berserk. Captain can do very little in such instances other than banging his head against the wall.
Our fast bowlers needs to watch clippings of Wahab Riaz bowling at full throttle in 40 degrees temperature in the desert (9 Overs on the trot in each spell with full intensity wearing his heart on his sleeve!!).

The bowling department looks listless with no one with the X-factor who can bail the team out from a crisis. It needs a complete revamp. They need to outsource a Starc or a Riaz from somewhere!! You just can’t concede 150 runs in the last 10 overs with the new rules!!It is a crime. I simply can’t fathom the exclusion of Umesh Yadav after the first few one-dayers .The mindset towards fast-bowling in India needs to change. The support of the captain is equally important for the fast-bowlers to prosper and Dhoni seems reluctant with respect to that regard. We can’t rely on our spinners forever. Yes Ashwin was missed but he cannot be our spear-head. The leader of the attack must be some-one who can intimidate the opposition with fiery short-stuff( Not at 125 kmph!!) or can act as a source of inspiration. Zaheer filled that bill perfectly for many years. The think-tank needs to invest in the likes of Yadav rather than a Mohit Sharma. The prospect of higher return on Investment is brighter in case of the former!Shami(If he is the same Shami that shook the world in Australia!!), Yadav and Bhuvi looks a decent combination with Aaron as the back-up.

It’s not all doom and gloom for the Men in Blue. The top 5 is certainly up there with the best if not the best. Rohit Sharma looks a class apart in the shorter format (Why doesn’t he replicate these performances in Test Matches?), Dhoni might have lost some of his Midas touch but Kohli has certainly regained some of his. Suresh Raina’s position needs a relook not because of his form but the way he shapes up against short-pitch bowling. He is a walking wicket on bouncier conditions. He looks a dead duck against short-pitch bowling. Uthappa looks a good option for the finisher’s role. He can keep as well!! Maybe that could also relieve Dhoni of the keeping duties for some matches if he wishes to.

Dhoni is a ferocious competitor and I still feel he has got a World Cup in him. I understand that he is not the same marauding Dhoni that won us the 2011 World Cup but that is quite natural. Surely as age catches up with you, your reflexes start to dwindle and with time bowlers start to exploit your vulnerabilities and weaknesses. Technology has just made it even more impossible to hide your short comings. Bowlers in the past few months have started to sort Dhoni out. They have realized that bowling short of a length and on his body is the best way to deal with this Monster Finisher and they have got relative success with it. But I am sure as he usually does Dhoni would find a way to find a way through this trap as well.

This is not the time to attack MS Dhoni and his team with ‘open swords’ but to support him in this rebuilding phase!!

Rush and Hush – By Sumella Qamar