Internship is certainly one of the most intriguing and exciting phases of a MBA as it acts as a starter before the main course.

Recently I interviewed Snehal Arote, who was an intern at ANB. She was candid and open enough to share her tumultuous as well as some pleasant experiences during her internship. 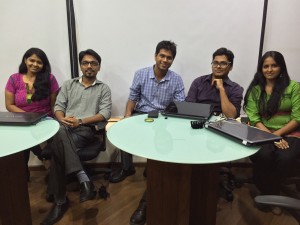 Following are the excerpts from the interview:

Can you enlighten upon your Internship experience?

First thing I realized at ANB that it followed a ‘salutation’ convention. Initially I used to call my senior Pankaj Wankhede by his first name itself, as I was still used to the Infosys culture, but once while having lunch I realized the culture difference and quickly got acquainted to that. This was the first major difference from Infosys.

Second difference was the multiple reviews which used to take place on one report as the reports were sensitive, confidential and one miniscule mistake can have huge business repercussions on the client. Plus multiple angles used to get mapped.

Another thing that I learnt was that the evidences which were collected should be justifiable. I was responsible as well as accountable in the sense that I was totally involved right from drafting the report to printing it. Or may I say till the client gave his final approval.

Sometimes I also had to  don the role of a consultant. As an illustration, if suppose the client didn’t have any know-how about the password policy then my role was to explain to him what exactly Password policy is, what the checks are related to that particular control, etc.

Security Subjects went a long way in aiding me. Plus the subject taught by Angelina Mam(ITIE) helped me as well.

To sum it up it was a terrific experience at ANB.

Can you elaborate more on your profile?

I was involved in conducting System Audits for Stock Brokerage Firms.

Project was divided into three Phases:-

Analysis of various circulars issued by SEBI and various exchanges like NSE, BSE and MCX-SX. SEBI is the governing body and all the exchanges come under its purview.

Then we underwent a Pre-Audit training session where all the controls were discussed.

Then in order to reduce the latency of audit we prepared an IDR (Initial Data Requirement) and floated that across to the client.

In the Audit phase we conducted System Testing which comprised of areas such as Order Management System, RMS ie Risk Management System Limit Checks (Both Quantity as well as Price), Password Testing and all this was conducted in the UAT environment. Furthermore depending on the needs of the audit we asked for the requisite documents and evidences and also analyzed the same.

In the Post Audit Phase we performed Change Dump Analysis, Incident Dump Analysis and also performed analysis of data at the exchange level and the application level ie for NSE we compared data at the NEAT level and the application level (CTCL) so incase if a particular user was found at the CTCL level and not at the NEAT level then it could be an issue as he may not be a registered user.

Based upon the facts gathered during audit, the team created the draft report and then our senior manager reviewed the same.

After receiving the consent from the senior manager, we mailed the draft report to the client.

CTCL (Computer-to-Computer Link)-Through this facility clients can install their own customized software on any platforms.

IML (Inter Messaging Layer)-Through this facility clients can install their own customized software on any platforms.

Is there a need to keep a separate period for internship in the curriculum? As you are from the corporate background, give your take from that perspective?

Certainly Yes. We got Industry exposure during this gap of 3 months. I was a developer at Infosys. So I was confined to that role only. Even though Infosys is CMMI level 5, we used to be lenient while scanning all the security related documents due to lack of awareness. Even When I got into college life, my approach towards security related subjects was very casual. Theoretically I learnt many subjects like IRM and VAPT but couldn’t really understand the essence of those subjects at that particular time. Even though we had case-studies, it didn’t create the same sort of impact

When I got hands-on experience during my internship I realized the actual enormity of the task at hand as I was accountable for the project. As an illustration, if an evidence is inappropriate against a particular point or is not sufficient the impact on the outcome can be quite massive.

The internship experience was a wake-up call for me with respect to how important information security is.

I think that this Internship was certainly a good experience for all the 5 interns.

Being a Non-Mumbaikar how difficult was it for you to get acclimatised to the climate and other hardships if I may use the word that Mumbai demands from you especially the travelling and all. Share your experience?

Talking about Mumbai I would like to write a book titled “My Journey at Mumbai” as my experiences (combination of harrowing with a mix of some pleasant ones) wouldn’t fit in small articles.

My office timings were during peak hours. It used to start at 9:30 and end at around 6:30. So there was no respite at all. The humid conditions added to my misery.

Travelling experience was a mixed bag to be honest. How the Mumbaikars manage to remain so calm and composed under such circumstances is a mystery in itself and they always seem to be happy. Even at the end of the day I hardly see any glum faces in spite of all the naggings of their colleagues and manager they might have to face, plus the stress of the work. Hats off to them.

I certainly would have been in the mental hospital by now if I had to endure the same pain day in day out. Mumbaikars are very helpful as well. Couple of times I felt unconscious and people were kind enough to take me to the hospital. At the start of my internship as I was new to this Mumbai circus, I felt out of place but gradually I started to adjust to the soap opera and slowly became an integral part of it.

People of Mumbai are also very inquisitive and are very open. They don’t have problems while communicating with strangers. They can initiate conversation from any random topics.

Overall it was hectic, considering the train travel, atmosphere and the crowd. I would rather stay away from this train race (a new term coined especially for Mumbai) in the near future.

I also feel jealous of the people who come by auto, come by metro and still manage to reach 15 minutes ( jibe at me) and I used to travel from Virar and I still used to manage to come on time.

First client experience was a pretty good one. I went as a shadow auditor. The respect which you get as an auditor right from the security guard to the senior executives makes you feel like a celebrity. Even when you enter a big MNC, the way they treat you at the reception is similar to a CAG Audit. In IT world respect is almost a fallacy. If I take the example of Infosys itself, as it was a flat hierarchy nobody cared who I was? But here it was totally the opposite.

My first client visit was turned out to be a pretty smooth one. The client was quite informative and knew the system in and out. So the audit went on pretty smoothly without any major interruptions and it finished in 3 hours even though the scope was supposed to be a pretty broad one.

My second client side experience was exactly the opposite. Thankfully, my senior had conducted the audit last time around so he had a fair idea about the client’s system (Strangely more than the client!!). Here, not only we had to conduct the audit but also act a consultant even though we were not payed for it. This is ANB’s USP you know, we offer more than just service which goes a long way in maintaining the relationship with the client.

Word about your colleagues at ANB?

They were very co-operative. As starters, they were unknown quantities but slowly a rapport developed between each one of us and I hope the bond remains intact forever. We had a lot of fun during our internship. We were allocated a separate cubicle (actually it was a library!!) and we used to make the monotonous day exciting by pulling each other’s legs or sometimes just the normal college gossip would occupy the entire day

My seniors were more than seniors for me. Even though we made a hell lot of mistakes, they didn’t escalate any of our blunders to the senior manager and handled it not only in a professional manner but also took pains to explain what was required and how you should have approached this particular thing? So this made sure that we didn’t repeat the same mistakes again and again.

At the end of the journey they more like our friends and mentors rather than normal office colleagues.