Is this the end for Cristiano at Real Madrid? Real’s stardom shredded to pieces

It was a total carnage at the Bernebau as a capacity crowd was left fuming rather than disappointed by Rafa Benitez’s so-called ‘Galacticos’. It was Barca all the way as they seized the initiative from Real’s nose with some precise and clinical passing leaving Real’s defense in a state of disarray. The game was well and truly over at the half-time whistle as Barca had conjured up a 2-0 lead (It could have been worse if not for Marcelo!!). The hapless crowd added more misery to Benitez and Real as they had enough of the listless performance from Real Madrid signaling their discontent through jeers and whistles. Second half proved no different as Iniesta added further dent to Real’s ego as he thumped a sumptuous drive past Navas to mathematically put the game beyond Real Madrid. 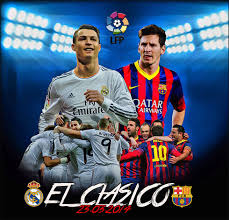 Real tried to strike back with a counter-attack move of their own but ‘Bravado’ of Bravo denied them that consolation. Suarez turned the humiliation into a catastrophe for Real as he sneaked passed a fourth through the leaky Real defense. Luckily the arrival of Messi didn’t add to Real’s misery but clearly the signs look ominous and it will need something special to stop this rampant Barcelona side.

Rafa Benitez will have to face some tough hard questions in the upcoming days as the Real press is one of the most unforgiving ones. It would be unfair to criticize Benitez for the drubbing. Players also need to take a lion’s share of the blame but certainly his rigid style of play needs a make-over. Players looked lost and played without any desire and commitment.

It was a night to forget for Cristiano Ronaldo. He looked disjointed throughout the game and cut a lonely figure. As the rumor-mills suggest maybe his time is up at Real Madrid and next season could see him reunited and more importantly rejuvenated with Manchester United with the shadow of money-spinners PSG lurking as well.

Great footballers are admired and loved everywhere but with Ronaldo he is sometimes not adulated on his home turf which is unfair for me. He has reached the zenith with Madrid but the love connect with the fans that every player desires will always be something which Ron would regret at his spell with the Blancos. It is a surprise considering the aura of Ronaldo. He is Ab De Villiers of Football. A complete package with no chinks in his armory. Sometimes he is subjected to unfair criticism from the media as well as the fans. His impeccable records certainly deserves more.

This season’s Ronaldo is certainly a counterfeit one. Maybe a change of club would do wonders for the current plight that he finds himself in Who knows?