We have with us two of the most sought after players at Symbiosis Premier League, who went for whopping amounts at the auction, Ashish Tandon and Gaganjot Sidhu. In addition they are also the sports coordinators of SIC, Organizers of SPL-7 and played a pivotal role in the success of the Independence cup.

For starters, as coordinators a lot of credit must go to you for putting up such a great spectacle titled the Independence Cup. It was certainly one for the ages. Looking forward to the SPL?

Ya definitely. It is one of the most sought after event of the year. We have been preparing for the same from the last two months. Lots of planning has been put into this to make it a success. We had a lot of pressure for carrying forward the legacy of SPL-6 as it was the best tournament organized till date at SIC. We hope SPL-7 will be even better and we will be able to raise the bar even further.

Can you throw some light on the format of the tournament? This time there is an additional team in the mix as well. So any changes expected from last year?

Last year the format had two pools with 4 teams allocated in both. But this had issues with the owners for getting into Pool of Death due to which some felt good teams got eliminated early. Considering the same we have followed the conventional format of IPL in which each team clash each other in a round robin format and every team gets a fair chance to show their ultimate caliber. 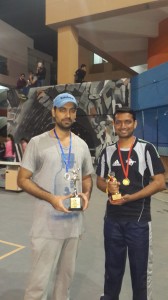 There is a lot of buzz created by this tournament. This is certainly one of the tournaments that students wait in anticipation for. What was your perception of the entire auction? Did it go according to your expectation?

As we said we have been preparing for this event from the last two months. As there is lot of personal stakes involved it creates an additional pressure to satisfy the needs of all the owners. So to maintain equity this year we have come out with ICON player concept. Both of us wanted to buy a team but most players thought it would be a one sided affair and keeping that in mind we came up with this concept and distributed all the best players into different teams. Learning from the recent reshuffling of positions in BCCI for removing conflict of interest it was decided that none of the organizers will buy a team.

SPL is certainly one of the marquee events of Symbiosis. How are the preparations going? Can we expect anything different from last year?

Yup the preparations are going out as per plan including the timing of the launch of the event, fixing dates of team Auction, Player Auction and the fixtures. As we said, the format being different this time around, we can expect this tournament to be the most open one for all. None of the teams may turn out to be underdogs.

Which are the players to look forward to in the upcoming players’ auction?

That’s a secret… Haha. It would definitely roll out itself on 21st. We would recommend you ask this to the Team Owners.

Thanks a lot Ashish and Gagan for having a chat with Reflections. Wish you oodles of luck for the success of this tournament and looking forward to this extravaganza.