SPL- Clash of the Titans!!

First of all hats off to the organizers for making the tournament work so smoothly , efficiently and also without any fuss. The format of the tournament was also kind to the owners as each team was given a fair opportunity of making the play-offs

After all the drama, ecstasy, despair and lost opportunities we have four teams who have booked their slots in the play-offs. The first three have eased their way into the play-offs while Delhi have sneaked their way  in despite being hampered by injuries for the majority of the tournament. As we head into the business end , teams will look to march their way towards the title. There have been rumors that Gagnjot Singh Sidhu was released by Delhi Daredevils from some quarters, but Delhi’s playing owner Venkatesh Padma was quick to dispel such fictional stories by stating that the swashbuckling owner is still an integral part of the side with a more than an outside chance of playing the play-offs 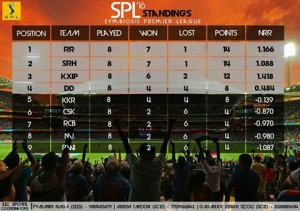 Two heavy-weights will face off against each other for a coveted place in the final of the SPL. Both come into this game on the back-off some impressive display in the group stages. Sun Risers bowling has been spell-binding. They have got variety in their bowling attack and looks impregnable. Madhur and Ashish have wreaked havoc in this tournament and mainly have broken the spine of the opposition. The bowling has been very miserly  and hard to get away. Mr. Yorker has also led his side well and his field settings have been innovative and refreshing. Rajkot would have to crack this Hyderabad code and let me tell you it won’t be easy. Their batting order needs a re-jig. The match-winners are coming in too late to have an effect. Ansh needs to come up the order as it was clearly evident in the last match where he was left with a herculean task and succumbed under pressure. Rajkot needs to get their act together after a shoddy performance against Hyderabad. It will come down to Hyderabad’s batting versus Rajkot’s bowling. Whoever wins that contest would have an upper hand. Hyderabad on the other hand will have their tails up after coming on the right side of a nerve-jangler against Delhi and would be favorites, but if either of Ansh or Rachit has a field day then those boundary ropes are going to get butchered.The loser will have a second bite of the cherry but both teams would like to grab this game by the scruff of the neck. 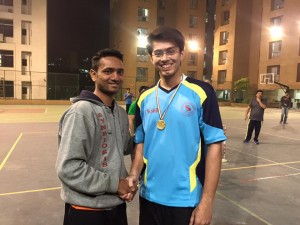 Delhi have provided the most entertainment in this tournament with their topsy-turvy ride. Blowing hot on one day, cold on the other they have been the enigma of the tournament.Having lost their talisman Gaganjot so early in the tournament due to a freak injury, Delhi were completely written off by some of the SIC pundits. But the fact is that the matches are not played on paper and on the field Delhi have shown resilience and pride barring an odd hiccup here and there.

Venki has led his side well in the absence of Gagan and he has been well-supported by the foreign recruits Hassan and Double D’s. Delhi’s batting has been phenomenal in this tournament and got them out of some serious holes. Hassan has been the cornerstone of Delhi’s batting and has made a mockery of the boundary ropes. Double D’s (Deepak and Deepak) have not been far behind and have made some telling contributions to the team. There has been talk of Gagan’s comeback which has sent shivers down the Punjab line-up. This can completely change the applecart and act as a timely boost to Delhi. Delhi’s bowling has been its Achilles Heel in the tournament with Shiv being the standout performer. In this sudden death the one who keeps the nerve will come out trumps in this match. If Delhi can get a performance out of their bowling attack, I can’t see them going down to their Big Brothers unless they have a really bad day in the office.

It’s all to play for in the SPL as a couple of humdingers are waiting in the wings.