Welcome to the season of T-20!!The most awaited tournament is just a few months away. As the selectors have already handpicked the men for the business, we look at how each and every team stack up and analyze the assets(or liabilities) of the major nations. Let’s begin with the last year’s finalists and the Champs of the inaugural edition Team India

India became the first team to white-wash Australia after Alexander’s invasion of India. Although Australia played with Five and a Half-Men, nothing should be taken away from the Men in Blue.

India’s Top Three looks invincible. Dhawan is motoring along like a bullet train. After a horrendous run, he got his swagger at the back end of the tour compiling a huge mountain of runs along with Rohit and Virat. His T-20 record seems to be a bit iffy but he has the potential and form to turn it around. The shadow of Rahane will provide a good competition to him at the top of the order.

Rohit Sharma is the only clock which doesn’t tick. He has all the time in the world to caress a cricket ball. Virat Kohli’s thirst for runs is unquenchable. He has even proved the ‘law of Averages’ wrong. 7 50+ scores in 8 innings is Bradmenesque. He is over the moon and for India’s sake he remains there and only come down to earth after clicking a ‘selfie’ with the T-20 World Cup. Rahane is that student in the school who always does the home-work on time and does not get rewarded. What a horrific time to get injured! The injury may have well cost his place in the playing 11. Difference between Raina-Test Player and Raina-T20 player is chalk and cheese. He is a sitting duck in the longer format whereas in T20, he is like a tiger hunting for his prey. Yuvraj Singh will have the opportunity to exorcise the ghosts of 2014 World T-20 final. If he gets in the groove, then the spectators will have to duck for cover. He showed glimpses of what he can do both when in-form and out-of-form in the last T-20 against Australia. When out-of-form he can put pressure on his partner while in-form Yuvraj can annihilate the opposition and shred them to pieces. Indian will hope for the latter. Does he still have it in him to perform on the big stage remains to be seen? Bowling remains a huge worry for MS Dhoni. Indian conditions will bring a relief of some sort for ‘Captain Cool’ where the ball is ‘likely’ to turn (You never know with curators what they have in mind. Maybe Dhoni should ask for a seaming track to get his desired pitch). 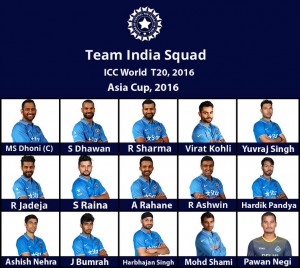 India’s bowlers are like sleeping partners in a project group with only difference being, former spoil the party while latter are rewarded with marks. India have missed the trick by not picking Mishra. He was the star of the previous edition and most batsmen were getting bamboozled by his doosra. India’s pace bowling cupboard looks bare. Jasprit Bumrah offers a ray of hope with his awkward action and his penchant for bowling Yorkers at the end overs but Nehra’s selection has raised a few eyebrows. His experience to this Indian team is similar to what Indian Railways is to India(it is one of the most invaluable part of an average Indian’s  life ) but let’s hope the former doesn’t account for losses like the latter.

Selectors have taken a big risk by investing in Shami. He was the pick of the bowlers in the 50-over edition but as it is written in the horoscope of Indian fast bowlers- A good show has to be followed by a spate of injuries!! He has been out of the picture for almost a year. Let’s hope the return doesn’t turn out to be a Ram Gopal Verma movie. R Ashwin and Jadeja are India’s trump cards in this series. If India wants a flush in the tournament then these two have to turn up in the deck. Hardik Pandya offers another option to the Captain especially with the conditions at Dharamsala where the bowl just might nip around in the air. Pawan Negi is the surprise package for me. Amit Mishra might have been a better option but Negi’s ability to clear the fence might have tilted the advantage in his favor.

T-20 is said to be anybody’s game but still Dhoni’s brigade are the clear favorites for this tournament. Their batting looks impenetrable while still cloud of doubts hover around the bowling line-up. Indian conditions might just come to the aid of MSD as he is prominently known as the ‘Spinner’s Captain’ and who knows the stars might just come together for him.

India vs New Zealand– 50:50 (Nagpur wicket will determine the result!!). NZ to edge it.

India vs Pakistan- No Prizes for guessing