Once Kings (now Paupers) of the Caribbean!!

They say ‘Don’t judge the book by its cover’. This idiom goes hand-in-hand with the current West Indies team. Their Test and One-day script won’t inspire much confidence in you but the T-20 team provides a completely different picture. The characters in this script are colorful, enigmatic and have the capacity to upset the apple cart. One day they can be jaw-dropping, on another they can be as frustrating as the traffic of Mumbai.

West Indies are the only side whose history is richer than the present; the only glaring exception is the T-20 format where they have dominated for the past few years. The fact that there is no love lost between the board and the players is well-known. You and I might reach Mars before the board and the players get their differences resolved but another T-20 triumph might just act as a ray of hope for the future.

Indian pitches have been a bed of roses for Chris Gayle and he would like to continue the romance. Simmons may look short in stature but he has the ability to pack a punch. His record for the MI is a testimony to that fact. Their lower middle-order looks the scariest of the lot. If Bravo, Russell, Pollard, Holder and Sammy click together or even three of them then they can make a tree out of a sampling within a matter if time. Jerome Taylor, not as fiery as a Roberts or a Garner, and Darren Bravo have been the torch-bearers for the pedestrian West Indies team specifically with respect to Test Cricket. They have been the lifeline of the bowling and batting respectively and have been the saving grace for the sinking ship. T-20 format might just help them to relax and slip under the radar of their mighty teammates.Samuel Badree is a miser and currently at the pole position in the rankings, Russell has the pace to rattle the opposition while Taylor has the ability to make the new ball talk. In Narine they have the wizard with a bag full of tricks but will his remodeled action bear the same fruit is something which the Caribbean fans will fret about.

If this team get their act together, then the rag-pickers outside the stadium will have a ball. Individually they are fixed assets to their respective franchises but will they play like million-dollar babies as a unit is as deep a mystery as the Bermuda Triangle. In Gayle, Pollard and Russell they have the brawn of a Hulk but do they have a Tony Stark in their squad who can keep his wit amongst the brothers of destruction?

West-Indies are a double-edged sword and the entire cricket universe would pray for the Windies to live by it. If they get their notes together, then be ready to shake your leg.

“Don’t blush baby. The Gangnam with the trophy is surely on.” I would leave it at that. 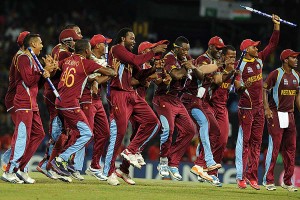 Predictive Analytics– Contenders (Fire-power is too tempting to resist!!)

Players to watch out for– The Big Jamaican (Christopher Henry Gayle) and the showstoppers of Trinidad and Tobago (Sunil Narine, Dwayne Bravo, Kieron Pollard)

West Indies vs England- England will struggle to cope with the magic of Narine and Badree!!

West Indies vs Qualifier- A formality (Bangladesh will have something to say about this!!)