‘Baz ki Nazar pe kabhi sandeh nahi karte’ (You can never question the vision of a hawk). It’s been that sort of impact that Mccullum has brought in this New Zealand set-up as we bid adios to this gentle tiger.

The current flavor of New Zealand is Mr. Mccullum as he has decided to hang up his humongous boots after the series against Australia. It’s a pity that the spectators in India would not be able to witness ‘Mccullum and the Swagger show’. New Zealand will have to get over from the aura of their talismanic skipper which will not be easy. It’s a good thing that Williamson already has the taste about the rigors of being a Captain thanks to Mccullum’s dodgy back during the summer back home but leading a side on a global stage is a completely different proposition.

The core of the group is already in place. Martin Guptill is in such a good form the he can even cultivate a Kiwi tree on a barren land (IPL franchises forgot to get their blinkers off during the auction). Williamson currently is the seventh wonder of Cricket across all formats (Elite list consists of Kohli, Root, Smith, De Villiers and David Warner). He is the brain of a Business Analyst who adheres to the requirements of the client (pitch) and goes about his business without being grumpy but making huge profits for the company. He will not give you an adrenaline rush like a Mccullum but like a bee he will go around building the bee-hives and at the opportune moment sting the opposition. 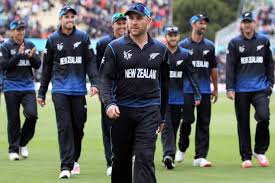 New Zealand are toying with the idea of Taylor at No.5 in order to add more firepower to the middle order. Ross Taylor can be the ‘X-factor’ who can multiply the energy derived from the mathematical equation (NZ=product of 11 players). Taylor and Anderson at the end overs can be total carnage.

Corey Anderson and Santner- southpaws will form the core of the balance sheet. Santner has been a revelation with both bat and ball. He is fight in the bull rather than the bull in the fight sort of character and has the agility of a ballet-dancer. The bowling ship is in the safe hands of the sailors Southee, Boult and Milne. Milne is a diamond with rough edges and NZ will do well in keeping it unpolished as on his day he can rip apart the back of the opposition with sheer pace. Southee and Boult are those loyal employees who will go about doing their work in an unassuming fashion but the docile Indian tracks will test their resilience to the core. New Zealand is not known to be a Spinner’s sanctuary but in Sodhi they have a joker in the pack who has a few tricks under his belt.

Mccullum’s capitalist approach has brought about a ‘Kiwi revolution’ in the country. It will be interesting to see whether the revolution sustains or fizzles out under the statesmanship of Williamson.

Predictive Analytics- Contenders (A good-blend of youth and experience. Retirement of Mccullum might just disrupt the flow of the river!!)

New Zealand vs Pakistan-(Depends upon which Pakistan team turns up!!)

New Zealand vs Qualifier-(A routine car-servicing for a mechanic!!)

Players to watch out for– Serene Williamson, Classy Taylor, Humanely Unhuman on bowlers Guptill and the Power-House Anderson

ECHOES OF SILENCE!- By Soumya Ganesh

The story of Ratanpur