England’s test to make a contest!!

Last year around the same time, England had become the inverse of ‘Be like Bill’. They were way behind the race in the shorter format and had a lot of ground to catch up. Now, the attritional duckling in terms of England‘s shorter format brand has transformed into a swan, thanks to some enterprising players like Stokes and Hales. They are a team whose revenues in terms of its export is much higher than any other team. The majority of the loan is provided by the Irish bank, followed by the South Africans. In Alex Hales and Jason Roy they have two explosive batsmen who can rip apart any bowling attack. Hales is a great find and he has shown the maturity side of the facet as well during the South Africa tour after a relatively quiet Test Series.

England’s fielding needs a real lift if they have to trouble their more-fancied opponents. Their butter fingers cost them the series against South Africa when they were on the brink doing a double. 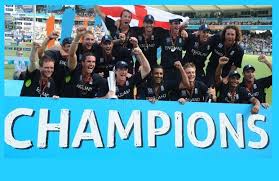 Luckily, the difficulty level of their group puzzle is easier, relatively to other group. They will have to beat two of Sri Lanka, South Africa and West Indies which in hindsight is not a straight-forward job. Sri Lanka’s unorthodox cricketers can cause relative discomfort to the Englishmen, South Africa have just hammered England in South Africa and to predict the outcome of a West Indies is akin to India’s Meteorological department. Joe Root has been a sensation for England in all formats. He is piercing the gaps with the dexterity of a surgeon and currently he is at the peak of his powers. England’s Root has to be strong so that the tree would not wilt away. Players like Ben Stokes and Jos Buttler are an organizer’s delight. Marketing expenses get reduced drastically.

Their bowling attack bore a look of a newly-bought car with rich features but unknown outcomes.England’s version of Bhurj Khalifa Finn will be sorely missed by Morgan. He was hand-picked to be the leader of the attack in the continued omission of Stuart Broad but a calf-strain injury has hampered England’s plans drastically. Topley made the South Africans do ‘Waka Waka’ with his adroitness and this unknown quantity can surely make England’s chemical reaction more explosive. Rashid is a bowler who has many tricks up his sleeves and he will enter the tournament on the back of an impressive Big Bash. World T20 will be a different kettle of fish for Rashid as subcontinent batsmen would look to milk him in the middle overs.

In South Africa, Morgan looked very much a polar bear in an equatorial region. He has to step up and lead from the front as his subtle wrists can be handy to maneuver the ball in the open spaces.

The bold and adventurous approach would make them exciting to watch but their frailties against spin could act as a big hindrance to qualify deep in the tournament. They have the team to ‘make it big’ but how they balance aggression with caution will decide their fate in the tournament.

(P.S:-England have been so kind that they have opted to rest Kevin Pietersen, so that he can whole-heartedly entertain the Punekars in the Alphonso months.)

Players to watch out for– Stokes (England’s Joker in the pack), Root (England’s base that holds the tree together), Buttler (England’s floater)

England vs South Africa- The match will be decided based on how England counter Tahir’s variations.

England vs Qualifier- A banana skin or a cake-walk?

England vs Sri-Lanka- England start as favorites as inexperienced Sri Lanka has looked like a team out of tune and rhythm.