Will the Kangaroos hop in joy?

There is a distinct similarity between Leonardo-Di-Caprio and Australia. Till February 2016, Di Caprio was the only king who had not earned the right to sit on the Hollywood throne but finally he has broken the hoodoo after bagging the coveted prize (Oscars). Australia on similar lines have been ruling the roost for the last decade or so but somehow, the T20’s most prestigious silverware has eluded them. Steve Smith and his men would set their foot on the Indian shores looking to create history.

Smith is an erudite cricketer , who plays within his limitations. His Michael Jacksonesque moves in the crease bamboozles the opposition bowlers and they inadvertently bowl to his strengths where he whips the ball of his hips.

Australia have a nice headache up their sleeve: The opening conundrum. There are many candidates who are banging the opening slot’s door. Watson, who has been given a new lease of life by the selectors, will look to make amends in his second wind. He displayed his repertoire of strokes in the final T20 against India and his balling for most part was frugal. His experience of playing in India will be like gold dust. The world T20 will probably be Watson’s last hurrah as well, so he will certainly look to end his illustrious career with a silverware. Usman Khwaja, with his rich vein of form and amazing eyesight could even find tigers in some of India’s sanctuaries. Aaron Finch’s iron-coated forearms would prove a handful on these small Indian grounds. The brand ambassador of ‘stand-and-deliver’ shot can make short work of these small Indian grounds if not dismissed early. The captain and the coach will have to sit together and do the balancing act in order to accommodate all the three openers.

Australia’s new strategy of playing David Warner in the middle-order has already started to pay rich dividends. Their new ploy of smothering the spin threat can prove to be a masterstroke in the T20 tournament.

Glen Maxwell is a loose cannon. He has this ability to hit the ball in uninhabited areas and can also clear the ropes with equal nonchalance.

The middle apartment of their house is in apple-pie’s order and can cause the most mayhem as well. Mitchell Marsh, Faulkner are the propellers to provide acceleration to the rocket which is already in motion. 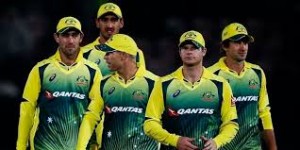 Australia’s bowling will be like an army without its commander with the absence of Mitchell Starc. Batsmen’s toes would heave a huge sigh of relief as their nemesis Starc won’t be there to barrage them with a slew of Yorkers. The void would have to be filled by Hastings, Coulter-Nile, Faulkner and Tye. The attack won’t give sleepless nights to the opposition batsmen but they would have to be guarded against complacency and can’t take this Australian attack lightly

Don’t be fooled by Australia’s meek surrender against India during the summer. They were in the experimentation phase and were trying to work out various permutations and combinations. If Australia’s batsmen get on a roll on these benign Indian Pitches, then they would certainly set the alarm bells ringing in the opposition camp.

The real test will be, how Australia keep the spinner’s at arm’s length. The good thing for Australia is that only India have the kryptonite to keep their Supermen at bay. Di Caprio bagged the Oscars. Will this be Australia’s year of T20 recognition?