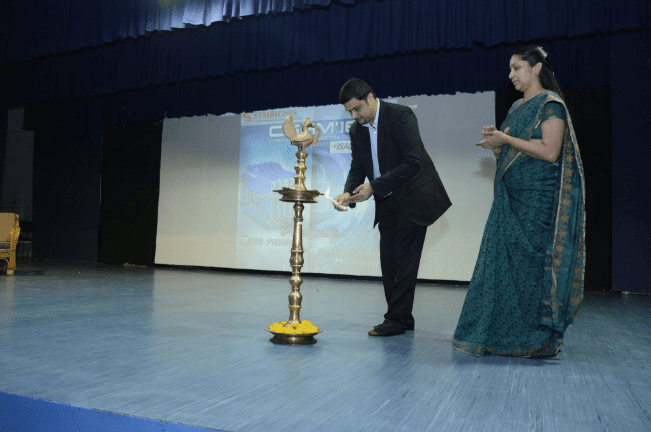 Following this, Dr. Dhanya Promod addressed the gathering and emphasized on how the cyber landscape is ever evolving and how it has created opportunities for aspiring professionals. She also threw light on the importance of being vigilant in today’s reckless pace of competition and how SCIT is contributing to it. A special mention that Dr. Dhanya made was regarding the curriculum of information security adopted at SCIT and how it is aligned with the practices and developments at ISACA.

As the event progressed Mr. Mohit Bhishikar enlightened the audience regarding his experience and how it has helped him gain versatile knowledge in this field. In the current era of digitization and more specifically commercial monetization of digital assets Mr. Mohit emphasized that Data Privacy has become a prerequisite to gain competitive edge.  Mr. Mohit also cited numerous examples which contributed to the audience gaining an insight of how catastrophic the consequences of the ill-implementation of data privacy practices. He also mentioned that in today’s scenario it is not only industry professionals but also individuals of all age groups who are subjected to a breach in their privacy. 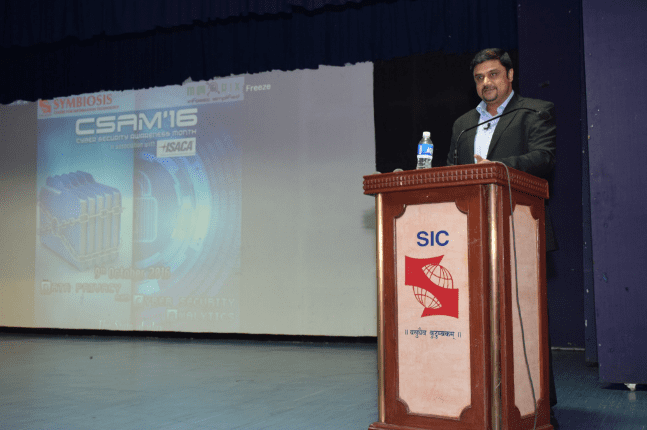 A panel full of zeal and accomplishments struck the right cord when the audience witnessed an exchange of a plethora of information related to Data Privacy and cyber Security analytics. The top honchos spoke about their experiences and practices which would benefit and contribute to the creation of a safer industrial paradigm in the future

Mr. Ranjeet quoted that the response to the security issues rising in the market depends on the economy’s philosophy of enforcement. Mr. Harsh also highlighted the unprecedented nature of the paramount risks that the industries are facing and the steps that could be taken to mitigate them. Ms. Sneha emphasized on the vulnerable aspects of applications that find use in our daily life and quoted that applications are vulnerable and without appropriate security mechanisms they are likely to be attacked sooner or later.

Mr. Aannaaand, the moderator steered the discussion in an interesting direction when he questioned the panel about how the quality of data can be ensured with regard to the requirements of a particular project or an organization and how developers can be guided with regard to compliance. The panellists answered citing various examples that they encountered from their experience. Instances like the Bangladesh bank heist were brought into the picture give the audience a fruitful takeaway. The panellists also agreed to the fact that the business needs/objectives should be in alignment with everything that contributes to the formation of a successful and secure deliverable. Also, Mr. Nitin spoke about the technical deterrents and their rising importance. When Mr. Aannaaand brought into picture an interesting issue of social engineering, Mr. Nitin said that it is up to an individual to decide how much data he/she shares. Dr. Shankar expressed an issue of paramount importance saying that “Man is born free but seems to be connected by chains of blocks through IoT.” Also, he quoted that “Data is our Karma, and saving it is our Dharma.” Ms. Sneha also added an insightful thought by saying that “Technology is an enabler of business, but any glitch in technology would cause the business to go down.”  Mr. Harsh said that an open standard network for all the known connected devices would be a handy tool in ensuring security.

As the panel discussion concluded, Mr. Aannaaand Deshpande opened the discussion to the audience and addressed queries put forward by the students. After the discussion, Eklavya, the theatre club of Symbiosis Centre for Informtion Technology made the audience go gaga when they addressed various issues of hacking and security through their skit. It was indeed a laudable performance and was much appreciated by one and all. 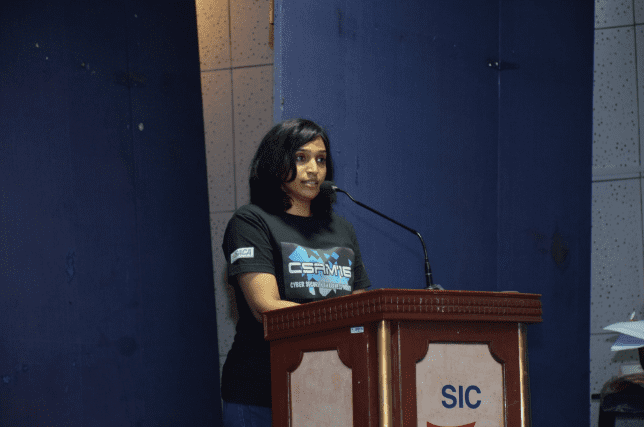 Prof. Angelina Gokhale’s Vote of thanks

Prof. Angelina Gokhale, the faculty mentor of Team Matrix extended a warm vote of thanks to the speakers and panellists. She also emphasized that the event contained a veritable mine of information which students would cherish. Post Lunch, the event continued with some fun and interesting events which involved participation of students from various colleges.