Caesar’s Planet of Apes: A Simian Revolution- By Ajay Ganesh 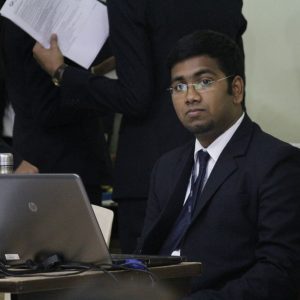 The Sci-Fi trilogy on Apes, began with 2011’s blockbuster Rise of the Planet of Apes. Humans’ experimentation with a cure for Alzheimer’s, leads to the evolution of a hyper-intelligent species of Apes. Apes went from normal to intelligent, while we, the humans went from intelligent (Or something similar) to worse (Seriously?) when the cure is tested on humans. The side effects lead to an imminent virus, threatening to wipe out the whole human civilization.

Andy Serkis’ Caesar, the ape protagonist, for this franchise leads the Freedom revolution for Apes. In the first instalment, Caesar’s spiking intelligence quotient is shown when he helps an old man use fork in the right way at the table (Breathe!). When Caesar joins other Apes in a zoo, there is one such scene where the Zookeeper finds Caesar, instructing all the others using sign languages. Caesar turns back and looks at us (fourth wall / camera). They have found a leader in Caesar. Caesar does not want bloodshed. He wants Freedom. As they escape into the Woods, outside of the city, far from the humans, the movie ends with Caesar saying, “Caesar is home”

Cut to the third instalment, Caesar is the brigadier/leader/King  of Apes, deep into the forests. However, we humans, plan to wipe off the apes (Supposedly life threatening) when all that is left is just 19.8% of humans left in the world. A ruthless colonel leads the attack on Apes while the human community in itself is split into two factions– One lead by Colonel killing every single infected human (Ruthless, isn’t it?) and other one led by (God knows who) whose only aim is to kill the 10% of humans in Colonel’s army. The threat to humans in none but the humans themselves, and they blame it on Caesar (How cruel!).

As Caesar decides to avenge his family’s death (Except for the cute ape, Cornelius), he goes in search of the colonel and ends up being captured. However, what gets noted of is the journey including the new member (An infected small girl, who cannot speak). When the girl asks if she also is an ape, Maurice (Second in command, Apes Army) decides to name her Nova. The background score and the tone of the movie is so intense that there was no sound in the theatre, except when Bad Ape makes the first crack at lightening the audience.

The plot unfolds with Caesar’s escape from the Colonel’s captive, where at the same time; the two factions of human civilization begin their War. Somewhere, Matt Reeves (Director) intentionally emphasizes on movie’s title War for the Planet of Apes, where it is actually one fought by humans themselves. I kept telling myself throughout the course of the movie “This is Motion Capture!” where I wanted to believe that the green-eyed Caesar was for real! When Caesar sees Cornelius play at the end, in their new found home, Maurice says, “Apes will remember their Father. Apes will remember what Caesar did for them”. The score at this moment, with faded claps somewhere in the theatre brought justice to the ratings. As Caesar looks at his Apes (Sorry) his family, he smiles for once. Andy Serkis’ performance as Caesar will be remembered. Caesar, was, is and will be a Phenomenon!