The Difficulty Of Being Good – Book Review By Chandrani Ta 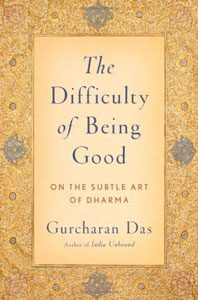 The genesis of this book is a consequent of the author’s previously written book “INDIA UNBOUND” released around the year 2000. The immensely popular book gained its translation into many languages for filming purpose by BBC. The author, Gurucharan Das, ex CEO of P&G group, is a frequent columnist writer of six different Indian newspapers. Based on the subtle art of dharma, the book revisits the epic tale of Mahabharata in reference to the modern day scams of Satyam, Reliance and Sahara group. The question it prompts one to ask is how often we prefer to read holy books such as The Bhagavad Gita and Ramayana. Apt mapping of value based cum moral based scenarios such as envy, duty, responsibility and courage with the situations arising underneath the entire script is one of the key aspects which captivate the reader throughout the book. Some of the vital points which decide the crux of the narration are with due respect to the role played in the Mahabharata.

A man may be a thinking person but his great deeds are achieved only when he works disregarding all his manipulations. Alongside the story of the epic tale, Lord Krishna has been alleged with the fact “You are God and must suffice to the well-being of all people on this earth, why are you not supporting our battle as well.”

Lord remarks “From my perspective you are involved in the traitor game of dice with a clear intent of falsifying the Pandavas and demeanor the respect of Draupadi. So, “WHO IS RIGHT?” The righteousness of act is the pivotal factor which helps to consider a situation and its possible range of reactions. To relate to our corporate work culture especially MNC’s, where a senior manager is unruly at times to the subordinates due to his or her work target vis-a-vis a junior employee tries to give his or her new input for organizational benefit. I have inferred that being judgemental about a particular course of action is not an effective way moving ahead. There are two sides of the same coin. The struggle is within us to promote the evil or the good but on numerous occasions, it is the situation which compels us to react the way we react. My favorite character is Lord Krishna since he emphasizes upon the fact that when there is a battle against five versus hundred, the man force will support the latter group but the critical point of the strategy is going to aid either of the group winning the battle, thus, imbibing a sense of unbiased attitude. So, I quote my experience with the below mentioned tag as –

“A must read since it is imperative to resolve some moral dilemmas of life”.