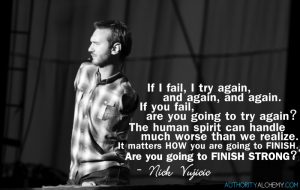 Just imagine going through your routine day to day activities without the support of your hands and legs! Picture your entire life without the ability to walk around on your own or even embrace those you love the most.

But there exists one man who makes these difficult tasks possible with ease –  Nick Vijucic !! The brave 34-year-old, born without arms or legs who inspires over 400 million people spread over 57 countries all over the world is the president of a non-profit organization, “Life Without Limbs”.

An Evangelist and New York Times best-selling author, Nick Vujicic was born in Melbourne, Australia with tetra-amelia syndrome, a rare disorder that is characterized by the absence of arms and legs thus making him one of the seven known surviving individuals worldwide who live through adversity all their lives fighting against this syndrome. Throughout his formative years, Nick dealt not only with the typical challenges of adolescence, such as bullying and self-esteem issues, but he also struggled with depression and loneliness as he often questioned himself “why he was different from all the other kids”.

As Nick grew up, he learned to deal with his disability. A mentor at his high school inspired him to start speaking publicly about overcoming adversity, so Nick started speaking to small groups of students when he was 17 years old. By the age of 19, Nick started to fulfill his dream of encouraging and constantly motivating other people by giving speeches revolving around his life story and inspiring faith in them. Thus, finally, he found the purpose to his existence by motivating other people around him in need. Today this dynamic young evangelist has accomplished more than most people achieve in their entire life. He’s an author, musician, actor, and his hobbies include fishing, painting and swimming.

Since his first motivational speech back when he was a teenager, Nick has travelled to over 57 countries, sharing his story with over 400 million of people. He is also the author of ‘Life Without Limits’, ‘Unstoppable’ (a New York Times best-seller), ‘Limitless’, ‘Stand Strong’ and ‘Love Without Limits’. No matter where he goes he communicates one core message— that no matter your circumstance, you can overcome!!

Nick Vujicic always gives more reasons to live and love the world around us, rightly quoted in one of his speeches “People always complain that they can’t-do this and they can’t-do that. If we look at our lives and concentrate on things that we don’t have or wish to have, that doesn’t change the circumstances. The truth is that we have to focus on what we have and make the best out of it.”