What do you understand by “Chinese Goods”, or for that matter even “Indian Goods”?

Made in China or Product of China is a country of origin label affixed to products manufactured in the People’s Republic of China. It is the most recognizable label in the world – making it a whole lot easier for Indians to recollect a product ‘Made in China’ than a ‘Made in India’.

You are most probably wondering why the sudden interest in this age-old tussle between is making buyers happy (due to the low prices of Chinese imports) and making home manufacturers happy. Then let me tell you this is not sudden; There are a number of reasons for bringing this topic up again but the main reason why it is the talk of the town these days is  — GST. 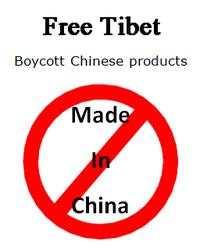 On the right, for those who didn’t know, is a typical slogan of Boycott Chinese goods from Free Tibet movement on the Internet. Tibet and India have always had good relations to the point that due to their similar situations (you know, struggling for independence), India can be considered Tibet’s greatest ally.

Recently, these two have called for a joint campaign to boycott Chinese goods due to border intrusion incidents that dominated news channels some time back.

And obviously, this decision had nothing to do with… 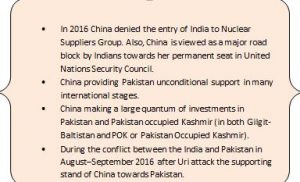 Because we being Indians have always been a champion for being tagged as the underdogs (referring to the ‘we’ in the collective sense of the word).

So you can see the debate between the Chinese manufactured products and the Indian manufactured ones has always been around, in one form or the other.

From the title, if you expected me to list the pros and cons of buying one of the two then you guessed right!

Low price, bulk availability, and variety are some of the favorable features of the Chinese goods in India.

But at the same time, the quality of these products has always been the center of controversies, not to forget the durability is also an issue most of the times. On the other hand

I would also like to mention that buying domestically produced things has a positive impact on our country’s GDP which results in the growth of Indian Economy (this fact though is not going to make millions of people throw away their personal motivations and buy domestically made products just out of sheer patriotism, let’s be realistic!).

Then comes the answer to all problems – GST: the country’s transformational tax reform may actually turn out to be a strong deterrent to cheap Chinese imports in India. 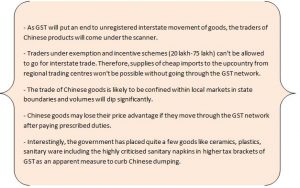 One may conclude that the GST is a blessing in disguise for domestic producers as they can generate new product lines and target import substitution to grab the market bereft of Chinese supplies thereby making it profitable for us to buy the ‘Made in India’ products.

However, the GST is a double-edged sword. It may firewall cheap imports but may not make domestic production cheaper for small scale industry due to heavy taxes on several products with the steep cost of compliance.

GST may come as a disruptor to Chinese imports in India, but whether it makes India’s small manufacturers competitive will remain a question that can be answered only in due course of time.

The Interdependency of Recruitment and Ethics

GST in other countries vs India