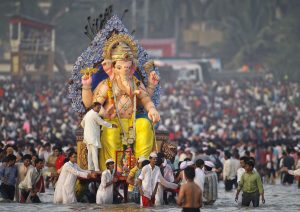 Can silence echo? Does silence take a form of sound? I am wondering. How do mute people think? I mean, I think in English when I communicate in English, or Malayalam or Tamil, or whatever is relevant. How does a mute person think? Aren’t thoughts associated to words? And words to language? And language to syllables? And syllables to sound? Don’t we all need sound to think?! Obviously, no. I know. It’s not the knowledge. It’s the amazement. It’s the sheer marvel of life around you. I see a lot of mute people here. In bus. In the road. Mostly, coz there’s some school/institute for them nearby, which I haven’t come across with yet. So my awe is not totally out of place. I always see them communicate with each other in those crowded buses. They want a seat to sit down so that their hands are free to communicate thru their gesture. I used to feel bad. But then thinking about what might they do in the dark, I often let the thought just pass by and close my eyes in silence.

Ganesh Chathurthy. Grand procession was on its way from the heart of the city, to the beach nearby for the auspicious ritual. Huge statues of Lord Ganesh would be thrown into the sea in reverence. The festive mood had stricken the city and the crowd hustled in the backdrop of deafening audio systems. Devotion was at its peak, with the blaring woofers. And I was to get a phone call exactly then, as I maneuvered myself out of the chaos, of noisy people and shrieking sound systems. I could do nothing but to put the caller on hold until I was out of the vicinity. On the way, I spotted two people. Probably, somebody whom I have already met but hard to recollect. The one thing I could connect, however, was that they were mute. They were talking. Calm and uninterrupted. The deluge of the sound systems hardly made any impact on their conversation. Life stood still. As the moment passed, I walked away, turning back at them once more. They were still talking. Unaware of the deafening sound. Unaware of the marvel. Unaware of the admiration.

Have you come across any Hudson Taylor?