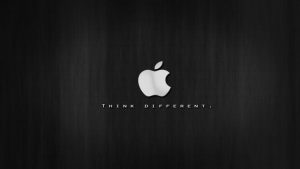 Is Apple still a creative, solid contender or is it turning into a specialty player compared to Android and Windows? – a question that I came across during the recent cramming sessions.

There is by all accounts a common feeling that something is out of order at Apple. The stock cost has fallen very nearly 40 percent since its September high of $700, recent innovations have amounted to minimal upgrades on existing models, and rivalry from organizations like Samsung is warming up. Many are indicating the passing of advancement powerhouse Steve Jobs as the fundamental reason behind the organization’s troubles. However, Apple’s third-quarter earnings imply the organization’s greatest days aren’t really behind it.

While the recent data may not look as promising as the ones before have sensibly driven many to take a bearish position on the organization, those with a more extensive—and more fundamental—see that Apple is as solid as ever. A gander at the organization’s history recommends that the time between earth-shattering discharges has been somewhere in the range of three to six years. That implies that since the arrival of the iPad in 2010, without a doubt at the most we could have seen something noteworthy was for this present year. With wearable tech getting approval from Tim Cook, iTunes radio prepared for the fall release, and with a huge amount of money being invested into R&D, Apple isn’t just laying on its laurels.

Apple is receiving the rewards of being a monstrous organization with a supply-chain specialist, Tim Cook, in charge. While Samsung has unquestionably developed into a genuine smartphone player, Apple still has certain competitive edges. The organization’s operating margin of 35 percent fundamentally surpasses the business standard of 18 percent. As indicated by Loizos Heracleous, teacher of procedure at Warwick Business School, “One of the primary reasons Apple has been so fruitful is their effectiveness.” Compared with Samsung’s 15 percent operating margin, Apple is “significantly more productive” than any of its rivals.

Apple is more than once misinterpreted in the market since it is making use of a strategy that is very different in comparison to every other organisation out there. This specific move is both gainful and is eating profoundly into the region which maintains its rivals.

Microsoft’s prevailing wellspring of pay is commercial licensing. Be that as it may, organizations are moving from desktop gadgets to less expensive smartphones which require significantly less equipment, less upkeep and less client bolster.The desktop worldview that has managed Microsoft throughout the previous two decades is contracting—and that is hitting the two its business and its Windows divisions. Microsoft knows this. IBM sending 1,300 Macs for each week, Apple clients require considerably less help than PC partners. Microsoft has endeavoured to broaden far from Windows/Office and towards new open doors like Cloud and Mobile. However, mobile has not been successful for Microsoft. Their mobile range is considered to be a wash. The cloud stuff is admirable, yet it’s not especially one of a kind.

95% of its Google’s revenue depends on the Search/Advertising services. The other services are industrially superfluous. (Indeed, even Android). The introduction of smart agents these days could ruin Google’s sole earner. Regardless of the possibility that Google themselves are the disruptor, there is no assurance that the following decade will have them similarly situated.

Intelligent assistants (alongside the semantic web) can possibly upset Amazon as well. The comfort Amazon gets from is being an online Walmart. All items present on the same advanced platform. Be that as it may, smart assistants would soon even this playing ground.

Taking a look at the Apple pie outline, it gives off an impression of being intensely subject to the telephonic part of its business. 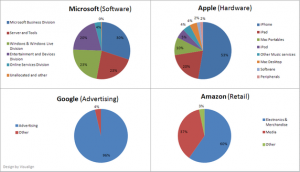 Be that as it may, on the off chance that they took the telephone away completely, the rest of the organization would even then have a various arrangement of sustainable products. Furthermore, the rest of the organization would in any case be bigger than Google or Microsoft. Likewise, it’s sensible to figure that the iPhone isn’t going to vanish. It merits watching that throughout the previous two decades, Apple’s emphasis on making equipment (as opposed to being an unadulterated programming/administrations organization) has been vigorously evaluated by financial specialists who consider equipment to be obsolete, and the future to bepurely digital. The entire web and all the information.

So ironically we are currently watching both Microsoft, Google (and to a lesser degree Amazon) rotating into manufacturing equipment—trying to secure productivity.

It’s as though Apple had it right from the beginning.

IN THE WORLD OF AUDIT……