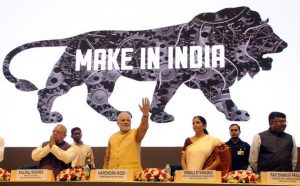 Make in India was launched by the Government of India in September, 2014. It has been active for three years and has raised many expectations from the Indian market. Make in India or MII was put forward to try and encash the benefits that India, as a nation, might gain by shifting from the tertiary sector of the industry to the manufacturing sector. India is a large market, thanks to its large population. Focusing on this aspect, our Prime Minister Sh. Narendra Modi envisioned India, one day becoming a market leader just as China is today, and then he introduced the campaign- Make in India.

This policy aims to encourage Foreign Direct Investment or FDI in the Indian market. This means that the national or multi-national companies are invited under this campaign, to invest in manufacturing plants in India. It visions to create job opportunities for Indians, foster their innovation, boost the economy’s growth, and expand the investment in infrastructure development. High percentages of FDI are allowed in 25 sectors of the economy, with a major objective of jobs creation and skill enhancement. To further facilitate investments, the rules related to obtaining and then maintaining a license to produce were relaxed. With easier FDI norms, according to World Bank’s 2016 ease of doing business index, India today ranks 130th in the list of 190 countries, with Ahmedabad, Bhubaneshwar, Gurgaon, Hyderabad, and Ludhiana as the top five easiest cities to do business in.

The Prime Minister of India coined a slogan, “Zero Defect Zero Effect” which means, such production mechanisms should be followed, wherein products have no defects, and the process through which product is made has zero adverse environmental and ecological effects. This shall ensure that the products manufactured in India are of high quality and globally competent.

Till now, Make in India has been lauded by experts and raised many expectations but a lot of hard work is required to turn these expectations into ground reality. On similar thought points, the then RBI Governor Mr. Raghuram Rajan came forward to envoice his belief that it is not very likely for India to succeed on the path of following China as the largest manufacturer in the world. There are various logjams that seem tough to break.

The former RBI Governor supports the idea of Make for India against Make in India. He supports his argument with the fact that Indian demand is highly price sensitive and not so quality driven. Chinese manufacturers can still be huge competitors as they have moved up in quality and can easily provide competent goods at aggressive prices, leading to a tough time for Indian manufacturers. “I am also cautioning against picking a particular sector such as manufacturing for encouragement simply because it has worked well for China,” he said. Simply put, our domestic markets should produce and supply public goods that each sector really needs.

Some of the arguments that criticize Make in India are contract binding and free exit. India does not have any control on the company’s raw material supplies. The outsourcing company binds India by contract and does not share its secrets. Also, the foreign companies are provided flexible entry and exit, so, if any other region in the world offers that company better conditions for manufacturing, they can shift their business from India causing a huge loss to employment.

Make for India may be an ideal strategy for India’s growth but given our low domestic demand and highly price sensitive consumers but our manufacturing can grow steadily with Make in India approach and concentrate on more foreign demand. Increasing per capita income via better employment might increase domestic demand which may drive Make for India in future but today, the lion with cogs and wheels must show some majestic movement forward.

In conclusion to this discourse, Make in India and Make for India both can be beneficial for India. Our nation can benefit temporarily from outsourced manufacturing plants but it cannot stress it beyond a limit. It should rather focus more on encouraging research and development and bringing industrial innovation. To make the country a manufacturing hub, the unfavorable factors need to be eradicated. A business friendly environment that provides technological prowess should be created to facilitate globally proficient manufacturing setups.

In this day and age of booming population, India’s workforce is expected to grow by 300 million from the year 2010 to 2040. To absorb such a large work force, the economy needs to produce roughly ten million jobs every year. According to the CEO of TaxiForSure, this workforce couldn’t care less if they were employed under Make in India or Make for India. They just need to be gainfully employed.