Is Sarahah the next Cyber Bullying Element? – By Pranshi Gupta

A new app named Sarahah is trending among youngsters. Social media experts say the new download allows anonymous feedback among friends. However, of late, it’s been conceivably hazardous and could be utilized for cyberbullying.

The application, which has now advanced towards the major cities of India, is fetching not just honest feedback of the user from his/her friends and known but rather is slowly turning out to be a stage for harassment. Over the last few days, the popularity of Sarahah, an anonymous messaging app, has soared in the nation with countless sharing posts on social media. The application is used by people for sending and getting feedback from others, but namelessly.

Interestingly, what makes this specific application work is its clear approach; it doesn’t contain any befuddling highlights. The creators guarantee that Sarahah, which in Arabic means genuineness(honesty), will serve as a platform for one to “get honest feedback from co-workers and friends”.

But in an age when awareness regarding cyberbullying is being reinstated every day, will this app also serve as an additional platform for spooks to spread cynicism and revile?

Well, it seems so!

A lot of people have been getting frightening messages on the application.  While a few have confessed to receiving messages from their stalkers, there are additionally some users complaining of various dangers and other similar threats. Users have already been complaining about cyber-bullying and death threats made using the app.

“It may remain popular amongst the youth for a while as a new platform for fun to share thoughts. Yet, the greatest drawback of the application is its potential for abuse”, said one of the cyber cell experts. Despite the fact that the application is anonymous, specialists say law authorization offices still can track who’s behind unknown posts if something winds up plainly criminal.

Basically, if there are violations of law and order, Sarahah will reveal the identity of the sender. 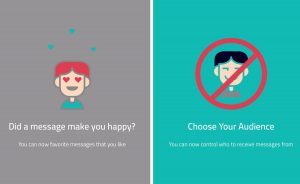 “You can also read the terms and conditions of privacy policy regarding disclosure of information which clearly mentions to never reveal the senders’ identity without his/her consent. But, if a sender violates the rules and regulations of the app or some other similar incident we may be forced to reveal the details of the sender.” said one of  Sarahah developer.

Hence, by taking into consideration all these flaws and inconvenience to the users, the developers of Sarahah should make some changes in the application to make it more user-friendly and make it a full on positive – fun application.

Additionally, the users should be mature when writing the feedback. They should maintain the dignity of the person and the society while writing any post related to anyone on the social media. Writing something in bad taste about someone today might turn the tables on them someday.

Let’s actually follow the first line which we encounter before writing … ” Leave a constructive message “, and not destructive 🙂