War Of The Gods : The Infosys Crisis — By Souptik Sur

Infosys, a big name in the world of IT, has been going through an internal tussle which in turn is hampering the brand value of the organization. Vishal Sikka, the chief executive who was brought in to turn around India’s Infosys three years ago, resigned on August 18th, 2017, stating a “continuous drumbeat of distractions” along with an unending battle with the company’s founder.

The brawl between Sikka and its founders began in February after founder and former chairman Narayana Murthy accused the company of corporate governance lapses. Coming back to few facts Narayana Murthy has always been appreciated for his way of working, ethics, punctuality, dedication, and diligence. He has handled the company and has always worked for the betterment of the same but the traditional methods that he followed were a great hit at his time. After the appointment of Sikka things took a turn, the revenues have grown from $2.13 billion in the quarter ended June 2015 to $2.65 billion in the latest quarter. In addition, the company said Sikka’s approach to profit growth helped lift the company’s liquid assets from $4.9 billion in June 2014 to $6.1 billion in June 2017.

Sikka’s approach was defined as dynamic and ready to adapt to the changes in technology, his thought process of work was different from his predecessors. He believed in the change and was ready to go up to any extent to reach the brim of technology. The new technologies which hit the market along with the latest tools or databases were his keen interest. He also inspired a lot of the employees to know the future so that they can be ahead in the race. 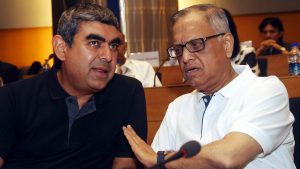 Now the cold war started between Sikka and Narayana Murthy with the buying of Panaya. Narayana Murthy hinted that Sikka might have acquired some profit through the deal. Though this was the initiation to the bigger picture Narayana Murthy carried on drilling Sikka for the same and in many other ways. Vishal Sikka a man of his work depicted this as highly unprofessional and came with the decision to leave the post as to protect his self-esteem.

Though Narayan Murthy has stated that all the allegations are baseless and he was interested in the governance standards thus wanted to investigate about the same. He himself called Vishal Sikka as more of a Chief Technical Officer than a Chief Executive Officer material.

Sikka’s resignation spooked investors in India’s second-biggest IT Services Company and sent its shares down nearly 10 percent, wiping $3.45 billion off its market value. The stock touched its lowest level since the start of Sikka’s tenure. In this chaotic scheme of things though, there is an important learning for all the other companies — to understand the importance of ethics and culture; how the basic pillars of the foundation of a company need to be strong to avoid an Infosys in the future. Hence, just like every other disaster, Infosys also serves as a learning.

True, the war is still on and the wounds are raw. And all parties are grieving one way or the other. But it could be too late for the Board to salvage this situation

Thus no one knows what is in hiding for the future but definitely, some miraculous decision or strategy needs to be formulated by Infosys to come back to the reigning throne.