During British era, the Railway Budget was part of the General Budget initially. Based on the recommendation of Acworth Committee, the Rail Budget was separated from the union budget in 1924 and this system was followed till now. But the Government has decided to merge Rail Budget with the Union Budget from the budget year 2017-18. The merger of Railway Budget with General Budget is based on the recommendations of the Committee headed by Shri Bibek Debroy, Member, NITI Aayog (Bibek Debroy committee) and a separate paper on ‘Dispensing with the Railway Budget’ by Shri Bibek Debroy along with Shri Kishore Desai.

In 1924, when the first Railways budget was presented, the Railways entailed more funds than India’s expenditure on all other aspects of administration combined, so it made sense to present a separate Budget. It was an effort to enable Railways to spend money according to its real needs and modernize following the first world war. For the next 90 years, the Railways continued to be the only government department to present a separate budget.  But that equation changed long ago, and now the Railways’ outlay is just 6% of the total expenditure proposed in the Union Budget for this year, hence the merging of the union and railway budget.

A key reason that a separate budget for Railways lingered for so long is India’s fractured polity and the tendency of coalition partners to demand Railways as a juicy portfolio with its possibilities for populist posturing and patronage. Over the years, the Budget has been misused by politicians as a populist platform to enhance their own image, but the merger of union and railway budget tends to stop this practice. The former Railway Minister, Mr. Suresh Prabhu, talks about the merger by stating. “I would say it is the biggest reform that has been done in this sector till date. But even after the budget merger, we will retain our financial autonomy. The finances would be managed in the same manner but we will be much more focused as the procedural requirements will reduce. We will continue to discharge all our financial commitments including capacity expansion and improving passenger amenities through our internal resources and through the budgetary support we receive from the government. “.

The key changes in the budget presentation are as follows: The Railway minister will not present the railway budget to the Parliament. Both the railway budget and the general budget will be presented by the finance minister in the parliament. The process of preparing the budget will remain the same and the functional autonomy of Railway budget will be maintained. The presentation of annual Budget would be advanced by a month. Accordingly, the budget will be presented before January 25 and the budget preparation will begin from early October.  The classification of expenditures into Plan (money to be set aside for productive purposes, like various projects of ministries) and Non-Plan (expenditure related to establishment, pension payments, subsidy, defence, finance commission grants and interest payments) has also been scrapped as the classification results in excessive focus to the plan expenditure and neglects items such as maintenance which are classified as non-Plan. 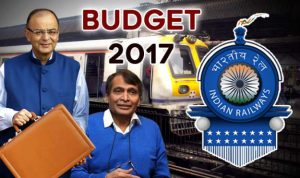 Some of the positive implications of having a separate railway budget are as follows: –

There was also some criticism of this move:  –

A separate post-Budget discussion in Parliament on the Railways, is no substitute, as the focus most likely will be on allotments to various projects, not on financial performance, which may be negative.

According to me, the aftereffects of the merger of the union budget and the railway budget will be seen and judged only after some time. The merger has been made with good intentions and hopefully, the advantages of the same can be observed in due time. For now, scrapping the Rail Budget is a good starting point to fix the fading utility. Bringing it back safely on track will take a lot more doing, and undoing.

There has been mismanagement of the highest order in Indian railways and if there are chances of seeing it improve, merging it with the Union budget is just the solution that could help. The falling revenue and more projects for new trains and stoppages have been a difficult project for the railway ministry which took the right step by merging the two budgets.
< Featured Image Courtesy: https://cdn.yourstory.com/wp-content/uploads/2016/09/Rail-budget-to-be-merged-with-union-budget.jpg>
< In-Text Image Courtesy: http://s3.india.com/travel/wp-content/uploads/2017/02/Railway-Budget-2017.jpg>
Post Views: 1,814
Spread the love
Tags:Budget, Debate, India, IT Management, Leadership, MBA in IT, MBA-ITBM, Merger, reflectionists, SCIT, SIC, SIU, Symbiosis, Team Reflections, Travel

A tête-à-tête with Siddhartha Joshi by Bishakha Jain