Desert diaries: A trip to Jaisalmer by Bishakha Jain

An impromptu decision to explore the unexplored led to the discovery of the selcouth place and learn about the facts that the place offers. Popularly touted as “The Golden City of India”, Jaisalmer is one perfect destination for curious travel buffs looking for authentic rural Indian escape. The city is distinguished by its yellow architecture and is located deep inside the famous Thar desert. So without wasting any time lets bump inside the city.

Founded in 1156 by the Rajput ruler Jaisal and reinforced by subsequent rulers, Jaisalmer Fort was the focus of a number of battles between the Bhatis, the Mughals of Delhi and the Rathores of Jodhpur. In recent years, the fabric of the fort has faced increasing conservation problems due to unrestricted water use caused by high tourist numbers. A five-storied structure constructed in a traditional Rajasthani method. The rich heritage of the Jaisalmer fort can be seen portrayed in the novel written by Satyajit Ray which was later turned into a movie. The architectural pattern of this fort is divided into three layers of walls. The outside layer is made up of solid stone blocks. The forts of Rajasthan are very intricate in nature. The second layer goes around the fort. The inward partition is the third layer which was used by Rajput warriors to hurl boiling water, oil, blocks of rocks on the enemies. This enigmatic structure is sure to keep your eyes wide open. 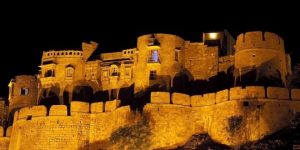 This stately tank, southeast of the city walls, was Jaisalmer’s vital water supply until 1965, and because of its importance, it is surrounded by many small temples and shrines. The tank was built in 1367 by Maharawal Gadsi Singh, taking advantage of a natural declivity that already retained some water. It’s a waterfowl favourite in winter but can almost dry up before the monsoon. The attractive 14th-century Tilon-ki-Pol gateway that straddles the road down to the tank is said to have been built by a famous prostitute. When she offered to pay to have it constructed, the Maharawal refused permission on the grounds that he would have to pass under it to go down to the tank, which would be beneath his dignity. While he was away, she built the gate anyway, adding a Krishna temple on top so the king could not tear it down. 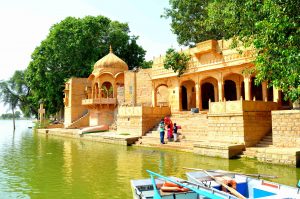 The Patwon ki Haveli is considered to be one of the most important Havelis of Jaisalmer because of two important things: it was the first Haveli to be ever built in Jaisalmer between 1800 and 1860 and it is a cluster of 5 different Havelis of 5 Jain brothers making it one of the biggest Havelis. The other name given to this Haveli is the “mansion of brocade merchants” because the Patwa family made their fortunes in brocade and jewellery. Currently, the Haveli is taken care of by the Rajasthan government. The gateways and arches of this Haveli are also masterpieces. The entire Haveli is made of yellow sandstone and the main gateway of this Haveli is brown. 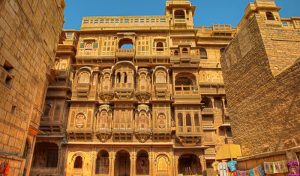 This abandoned village is 19km west of Jaisalmer, 6km south of the Sam road. It was abandoned by its Paliwal Brahmin inhabitants – just like the area’s 83 other Paliwal Brahmin villages – about 200 years ago. They were heavily taxed, their property was looted and the daughter of one family had been kidnapped, but there was no response to their complaints, so the entire community upped and left. Legend has it they buried the gold and silver they couldn’t carry in Kuldhara, which has attracted treasure hunters to the area. Some of the houses are in remarkable condition as they have been restored for use as film sets – this is a popular Bollywood location, and so attracts plenty of Indian day-trippers. 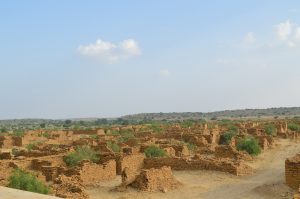 Goddess Tanot is believed to be the incarnation of Goddess Hinglaz which is located in Lasvela district of Baluchistan. In 847 AD foundation of Goddess, Tanot was kept an idol was installed. Generation of Bhati Rajput takes care of this temple. Earlier during the Indo-Pak war of 1965, Tanot Mata temple did not even touch by targeted bombs by Pakistan Army whereas all the bombs did not explode which falls in the vicinity of the temple due to Goddess Tanot divine power. Those unexploded bombs now can be seen in the Tanot Mata temple museum. After the war, Border Security Force of India continues to manage this holy temple till date. Located very close to the battle site of Longewala- Jaisalmer, visitors cannot go beyond the temple. Now Tanot Mata turns out to be a popular tourist destination and a perfect place to explore in the Thar desert. 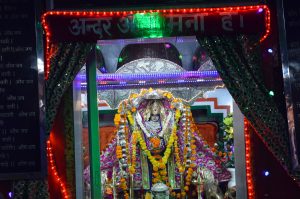 The silky Sand Dunes are one of the most popular excursions from the city. The band of dunes is about 2km long and is undeniably one of the most picturesque in the region. Some camel safaris camp here, but many more people just roll in for sunset, to be chased across the sands by dressed-up dancing children and tenacious camel owners offering short rides. Plenty more people stay overnight in one of the couples of dozen tent resorts near the dunes. All in all the place acquires something of a carnival atmosphere from late afternoon till the next morning, making it somewhere to avoid if one is after a solitary desert sunset experience. 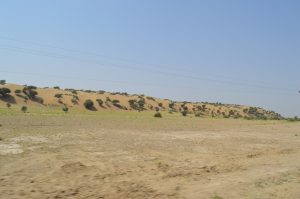 For the love of the desert, I would love to enlist the activities that were shouldered during the stay at a camp at the sand dunes.

i.The Camel Ride and the sunset

The memories of the colourful night have been etched into my soul forever. Beholding the beautiful sunset behind the golden sand of the sand dunes and proceeding to the camp and enjoying a traditional welcome followed by the Rajasthani folk music and dance while enjoying evening tea and delicious snacks and having a delicious Rajasthani buffet near the campfire with my loved ones is something to cherish for eternity. 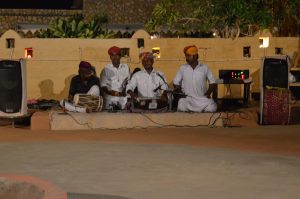 The mysterious desert is the ideal venue for a magical and memorable day. Leaving behind the hustle and bustle of the city, we set out over a dune safari after dinner. The driver led us to the thrilling journey over the sand dunes, and through the Jaisalmer Desert Conservation Reserve. We experience the aspects of the traditional life of the golden city with the mythical and timeless beauty of the desert with the dune safari in Jaisalmer under the night sky full of stars. We were looking for some enthralling desert adventure and this tour has turned out to be a perfect fit for us. 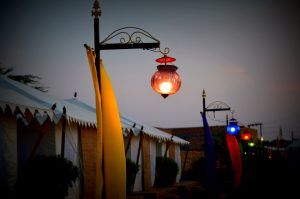 The anecdotes of the courageous rulers of the bygone era, tales of unequalled valour, unique in its beauty and undaunted spirit have kept Jaisalmer alive in all its glory. Stay tuned for another experience of another popular place in the country to learn more about this magical land of diversity.