“Rupee tanking to all-time low”, “Rupee closes higher against the dollar over US-China trade talks”, ” The falling rupee is also dragging down businesses along with it”.

These were some headlines that have been abuzz in the media for the past few days. But, have you ever wondered why almost all the global currencies are valuated against the dollar? Or why is the Rupee so overvalued when compared to the US Dollar? Or why the value of the Rupee against a US Dollar has risen to 70 in 2018 from 20 in 1992?

A lot of forces are at play some domestic, some foreign, some controllable while some beyond the control of the Indian Government. In this article, we’ll be examining those factors but before that, we would look at the International Trade conditions that made US dollar the strongest currency on the planet.

Why the Dollar Dominates?
Post World War 2, the world’s developed countries gathered to create a standard finance system in Bretton Woods, New Hampshire. They fixed the rate of exchange for all foreign currencies to the U.S. dollar. The Bretton Woods agreement promised that the United States would redeem any dollar for its value in gold. By the early 1970s, countries began demanding gold for their dollars to curb inflation. In 1971, U.S. stagflation prompted the United Kingdom to redeem most of its U.S. dollars for gold. President Nixon took the dollar off the gold standard to protect the remaining gold reserves. As a result, the value of the dollar plummeted.
In 1979, the United States and Saudi Arabia negotiated the United States-Saudi Arabian Joint Commission on Economic Cooperation. They agreed to use American dollars for paying against oil contracts. The U.S. dollars would be recycled back to America through contracts with the U.S. contractors. Since then, oil-exporting countries have become more sophisticated. They now recycle their petrodollars through sovereign wealth funds. They use these funds to invest in non-oil related businesses. The profits from these businesses make them less dependent on oil prices. Here are the world’s largest  petrodollar recyclers ranked by assets in 2017:
1. Norway Government Pension Fund –$1.032 trillion.
2. U.A.E. Abu Dhabi Investment Authority–$828 billion.
3. Kuwait Investment Authority–$524 billion.
4. Saudi Arabia SAMA–$494 billion.
5. Qatar Investment Authority–$320 billion.
6. Saudi Arabia Public Investment Fund–$223.9 billion.
7. UAE Abu Dhabi Mubadala Investment Company–$125 billion.
8. UAE Abu Dhabi Investment Council–$123 billion.
9. National Development Fund of Iran–$91 billion.
10. Russia National Welfare Fund–$66.3 billion.
11. Libyan Investment Authority–$66 billion.

The United States uses the power of petrodollars to enforce its foreign policy. But many countries don’t fight back. They are afraid it would mean the collapse of the petrodollar. And that has been one of the major reason why Dollar dominates and even a meagre instability in the US economy affects the global economy.

History of Rupee against Dollar

Fig: Graph showing the Indian rupee and U.S. dollar exchange rate from January 1990.Source: US Feds
The first major devaluation of the rupee happened in 1966 when it was pegged against the US dollar at Rs 4.75/$. With two major wars, against China and Pakistan, and with multiple changes to India’s leadership in the post-Nehru era, led to the steep devaluation of 57 per cent, taking the value of the rupee to Rs 7.5/$.
From 1966 to 1980, the rupee remained largely stable. However, the global economic problems of the early 1980s followed by the energy crisis of 1991 during which the prices of oil and gold surged, rupee had to be devalued again, to Rs 17/$ by 1991.
In 1991, India had an economic crisis. The government had a balance of payment problem and was on the verge of defaulting. The rupee was further devalued to Rs 25/$ as part of the measures to overcome the crisis.
By 1993, with the liberalisation of the economy, the rupee started to slide towards the Rs 35/$ mark, as the open market had taken control of its exchange.
In 2008, with the global recession, the rupee rose to Rs 51/$, after having appreciated to Rs 39/$. In 2012 with the Greece-Spain sovereign debt crisis, the Indian government’s budget conditions worsened and GoI had resorted to selling dollars which devalued the rupee further to Rs 56/$ in June 2012.
Over the years, the Indian rupee has devalued itself every year, and now it costs Rs 69 and seventy-eight paise as of August 27, 2018, to buy one American dollar. This process of deliberate downward adjustment of the value of a country’s currency against another country’s currency is called Devaluation. Its reasons are listed below:

1. Interest Rate Arbitrage: The US federal fund rates have been currently at 2% while the rates in India have been at 6.5 per cent in the same period. On average, there would be an approximate difference of 4.5% in the interest rates of the two economies. And this is why the value of the rupee depreciates by about 4.5% to maintain a balance. If not, there would be an interest rate arbitrage opportunity, i.e. people earning in dollars would like to invest in India to earn 4-5 % on investment and then take the earnings back to the US where the returns are significantly lower. In order to overcome this arbitrage opportunity of interest rates, the rupee depreciates. Now, in order to boost exports or overcome other immediate financial crises, countries devalue their currency deliberately at times.
2. Current Account Deficit or CAD: CAD is basically the difference between the import and the export in a country. India being a primarily import driven economy has a high historical CAD. In June 2018, India’s CAD stood at $48.7 billion, i.e. 1.9 % of the GDP. By being a net importer, India buys more than it sells. This gap between income and expenditure keeps a sustained downward pressure on the value of the rupee.
3. Inflation: There has been a difference in the inflation of both the economies primarily because the RBI supplies money faster to the Government of India than the US Federal Reserve does to the US. Thus by printing more money, the RBI boosts inflation of the economy with no rise in taxation. In the recent past, oil price-driven inflation surged, and India as a net importer of oil contributed to the inflation with its demand for oil.
4. Boosting Exports: As currency depreciates in the global parlance, exports become more favourable and imports unfavourable. This boosts the internal economy towards export and internal usage of own goods. India’s exports rose by 14.32% to $25.77 billion in July, while imports during the month were valued at $43.79 billion.

Why is Rupee tanking now?

Apart explained above, the Rupee has been mainly tanking due to the following reasons:
1. Widening Current Account Deficit: India’s imports are rising when the exports have hit a 14-year low. That has increased the trade deficit, the amount by which a country’s import value exceeds its net exports, by up to $156.8 billion for the financial year 2018, compared to $105.72 billion in the previous year. India is spending more to buy commodities and products from outside the country rather than selling it’s products and commodities to the world, which is leading to a weaker rupee.
2. Rising Crude Prices: Nearly 80% of the country’s fuel needs are met by imported crude oil. While demand for crude oil is rising, so is the cost. The Indian crude bill, the weighted price of all the country’s crude oil imports, has gone up from $52.49 in April last year to over $63 in March 2018, a rise of 22% in a year, according to government data. 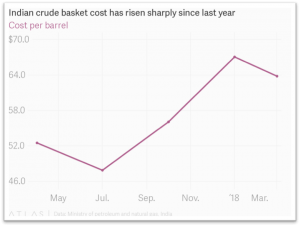 Is the situation critical like it was in 2012-13?
There are some similarities between the decline of Rupee in 2013 and now in 2018, however, the differences are huge. In 2013 Indian economy was clubbed in the ‘Fragile Five’ with GDP growth rate at a poor 4.5%, Inflation more than 10% and a Fiscal Deficit(Difference between Expenditure and savings) of 4.9% of GDP. Apart from that our Current Account Deficit was around 6.1 % of the GDP while our Foreign Reserves were below $300 Billion.
In circa 2018, the Indian economy has been the fastest growing economy with a growth rate of 7.7 %, Inflation of 4.5% and Fiscal Deficit of 3.3%. Apart from that our Current Account Deficit has been around 2.6 % of the GDP with Foreign Reserves at an all-time high with a value of more $400 Billion. In 2013 the Rupee had collapsed by mere 45% in a matter of 2 years 5 months whereas in 2018 it has only dropped by 10% in 4 years.
The opinion of prominent experts: Following are the statements of prominent Indian economists and their opinion on the Rupee.
1. Raghu Ram Rajan, Former RBI Director: “Well just to be fair, the Indian authorities have brought down the fiscal deficit. What has expanded is the current account deficit. A lot of it driven by higher oil prices, the rupee has not depreciated to too worrying levels, its sort dollar strength around the world.”
2. Arvind Panagariya, Vice Chairman, Niti Aayog: “The main news recently in the macro story is depreciation of the rupee. But this had been long overdue. The real exchange rate has seen large appreciation in recent years and this has hurt our exports”.
3. Arvind Subramanian, Chief Economic Advisor of India: “If oil prices rise and other currencies depreciate, the rupee depreciating has to be part of the adjusting mechanism”.

The parochial nature of Indian Society