This is a series of blogs that I will be writing for everyone to get a basic understanding of this immensely important research field which is poised to become mainstream in a few years and significantly impact our daily lives.

All computers today including laptops, notebooks and even smart phones are termed as classical computers. All of these use ICs which are constructed from basic digital elements called transistors. In essence, transistors act as electronic switches and operate on electric current. When the switch is open, and no electricity is flowing, it represents a 0 bit. When the switch is closed, and electricity flows through the circuit, it represents a 1 bit. This is shown in Figure 1a below. Everything that today’s computer is able to do, is done by operating on one or more bits at a time very quickly. At any time while the computer is running, it can be in one of 2n possible states, where n is the total number of bits, ranging from 00..000..0 to 11..111..1.

Unlike classical computers which are based on bits, quantum computers are based on Qubits (Quantum bits). Qubits operate according to two key principles of quantum mechanics, namely superposition and entanglement. A qubit can be in state 0, state 1, or a mixture of 0 and 1 at the same time. This is known as superposition. This allows the quantum computer to simultaneously exist in exponentially many logical states. As shown in Figure 1b, before we measure its value, a qubit is in an indeterminate state due to superposition.

Along with exploiting superposition, quantum computers also take advantage of another counterintuitive feature of quantum mechanics called entanglement. When individual qubits become entangled, they can no longer be described individually. They can only be described as part of the system as a whole. Further, there is also a correlation between entangled particles even if they are separated by very large distances. Measuring one of the qubits immediately affects the other entangled particle.

The innovation in quantum computing is in the way scientists have taken advantage of these two principles and enabled quantum computers to function in ways that allow them to take up and provide solutions for difficult problems that cannot be solved using today’s computers. 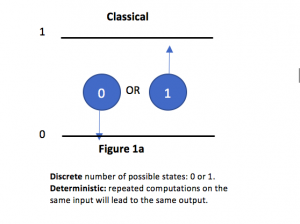 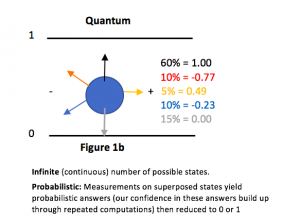 In terms of processing of information, in a classical computer, at the fundamental level, bits are processed sequentially, which is similar to the way a person would solve a math problem by hand, one step at a time or one would write an algorithm which gives sequential steps for execution of some problem.  In quantum computation, qubits are entangled together so changing the state of one qubit influences the state of others regardless of their physical distance (as mentioned earlier). The consequence of entanglement is that quantum computers have the ability to work on multiple solution options in parallel resulting in converging quickly to the right answer for a given problem. As a result, qubits working together to find the optimal solution are more efficient than certain classical approaches.

In the next few blogs I will provide some more elaboration on the principles of superposition and entanglement, the quantum computing architecture, its building blocks (quantum gates and quantum circuits), ways in which quantum computers can be physically realized, meaning of a difficult problem from a purely mathematical perspective, problems which are difficult for classical computers to solve and which the quantum computers can potentially address, why is everyone from Google, NASA, IBM and many governments across the world funding research on quantum computing, why is quantum computing becoming increasingly important in industry such as security of various banking and other classically secure transactions and systems, random searches, important quantum algorithms for use in industry, quantum internet, quantum cryptography, fault tolerant quantum computation, quantum machine learning, quantum communication, and many other exciting topics.