A rendezvous with the MALANG band by Shobhita Jain

Team Reflections have had the opportunity of interviewing- “The MALANG Band”. The MALANG is a “Sufi Ethnic” Rock band based out of Pune. A complete ensemble of vocalist (Zeeshan Khan), guitarist (Siddharth kota ) a bassist (Chandrakant Unavane ) and a drummer. (Ganesh ).Their music embodies music, expression and freedom – a fusion of classic rock with Urdu/Hindi lyrics. The band is managed by Zeeshan and Neda.

They also received the following awards for their brilliant performances-

So without wasting any time, let’s get into this conversation with these Sufi Ethnic Rock Band.

Shobhita – Starting with the first question to Zeeshan could you explain us Malang Band in five words?

Shobhita – This question is for all of you that, what is it about your music that people across all generations sway to your tunes?

Team– We are trying to create Music that is not restricted to any specific genre and try to keep the essence of simplicity so that it resonates to people of all ages.

Shobhita– How did you all take this journey? Was it smooth?

Team– We work very hard on establishing a name for ourselves and it is the people trust that has led us to give more than 100% and perform to the best of our capabilities.

Shobhita– You has won many awards in Pune itself. What is your next target?

Team- The next target is to release our album and to perform at NH7.

Shobhita– Where did you derive this energy and passion from?

Zeeshan– Whenever I perform on stage, the audience respond to our songs and tunes with tremendous energy, therefore my passion and energy towards music increases more and it takes the performance onto a different level altogether.

Shobhita – Where do you see Malang the band in upcoming years?

Shobhita –What drew you all to the music industry?

Team– Everyone in the band has a different influence on life and music. All of us follow different Musician / Artists and by seeing and following their footsteps, we tried to make it into the industry.

Shobhita- What does your Band name mean?

Shobhita- Which famous musicians do you admire? Why?

Shobhita– How did you all meet?

Zeeshan- It’s a long story everyone has a better different stage of life if I talk about Chandrakant. We started our journey for another project and then I need that project as Malang and started the journey.

Shobhita- What advice would you give to beginners who are nervous?

Zeeshan- Music and performing it’s all about consistency you keep learning and keep performing don’t lose focus that’s the key and that would help you to reach where you want to.

Shobhita- What is the best moment of your life during your music journey till now?

Zeeshan- I would say it has not arrived yet I am still waiting for something outstanding to happen in my career.

Shobhita– When did you all start your musical journey?

Team– Everyone in the band has been playing and performing for almost 10 years now.

Shobhita– When did you start this band?

Zeeshan– Malang the Band was formed in 2014.

Shobhita– What are the challenges you faced in starting this band?

Zeeshan– Music and performing it’s all about consistency you keep learning and keep performing don’t lose focus that’s the key and that would help you to reach where you want to.

Shobhita– Malang the band has given SCIT one of the best concert nights ever. We are so delighted to be able to have you here. So how was your experience in SCIT?

Team– SCIT was a Magical and full on Powerful Concert. By far it is one of the best live concerts we have ever performed. We won’t be able to forget the high energy that SCITians have. Thank you for having us. 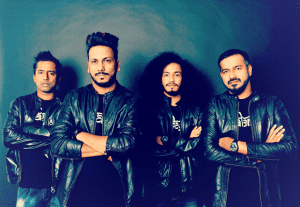 A Quick Rapid Fire with Zeeshan –

Zeeshan –Mekaal Hasan band Agni jal door and artist Javed Bashir Hariharan Sahib .If I talk about drums it is Darshan Joshi and if it is about music direction its Shankar Mahadevan, Amit Trivedi and AR Rahman

Zeeshan– I have my brothers around and we chill.

Thank you so much to all of you for giving your valuable time. All the best for your next performances and will hope to get another chance to hear from you all soon.